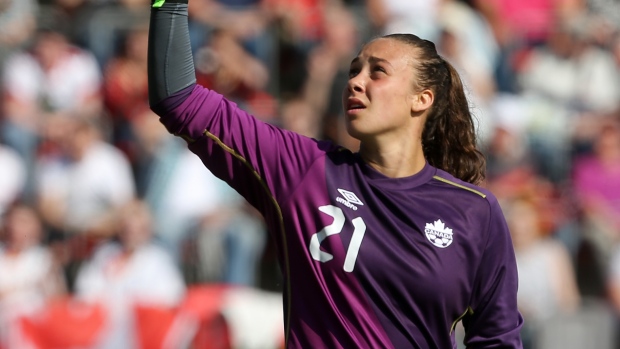 Although she only has seven appearances to date for the national team, Kailen Sheridan is one of Canada’s most promising young goalkeepers. She is coming off a breakout year with her NWSL club, Sky Blue FC, setting the league record for most saves in a season.

Sheridan’s first foray into Canada Soccer came in 2010, when she was invited to Under-15 camp. Two years later, she played every minute for Canada at the 2012 CONCACAF Women’s Under-17 Championship, recording three clean sheets. Later that year, she also starred for her country at the 2012 FIFA U-17 Women’s World Cups, playing all 90 minutes in all four of Canada’s games, earning two clean sheets and helping lead the Canadians to the quarter-finals.

Two years later, Sheridan was back on the world stage at the 2014 FIFA U-20 Women’s World Cup in Canada. She once again started in all four of Canada’s games, losing to eventual tournament-winners Germany in the quarter-finals.

While still waiting for an official call-up to the Canadian senior team, Sheridan was named to the roster as Stephanie Labbé’s backup for the 2015 Pan American Games. Sheridan lost her one start of the tournament – a 2-0 defeat at the hands of Costa Rica.

Sheridan joined Clemson University in 2013, where she played for four years. In her last three seasons with the Tigers, she earned First Team All-ACC honours, becoming the first Clemson player to be named to the team since 2007. In her senior year in 2016, she backstopped the Tigers to their first ACC regular season title since 2000 and Clemson also made its first trip to the Sweet 16 of the NCAA Tournament since 2006.

It was also in 2016 that Sheridan earned her first invite to Canada’s senior camp, after goalkeeper Erin McLeod tore her ACL and Labbé became the team’s new starter. Sheridan made her debut on Mar. 7, 2016, earning a clean sheet in a 1-0 win over Iceland at the Algarve Cup.  Sheridan earned several more call-ups to camp that year, and was named as an alternate for the 2016 Rio Olympics.

After being drafted by Sky Blue FC in the third round of the 2017 NWSL Draft, Sheridan has been a star for her team for the past two seasons. In her rookie year, she finished third in the league with 83 saves.

Last season, despite Sky Blue’s dreadful finish (one win in 24 games), Sheridan once again stood out.  She started in all but one of Sky Blue’s games, recording 108 saves, a new league record.

Sheridan made three more appearances for Canada in 2017, recording another clean sheet against Costa Rica on June 11. Last year, she was named to the Canadian roster for World Cup qualifying after another injury to McLeod.  Sheridan picked up another shutout in a dominant 12-0 win over Cuba.