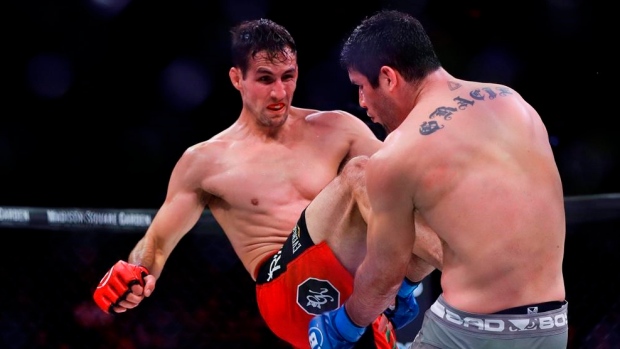 MacDonald, the second seed in the 170-pound division, had no answer for Cooper's grappling and spent most of the fight on his back, unable to mount any offence. The judges scored the bout 30-27, 30-27, 30-27 for Cooper, the third seed.

Cooper (23-7-1) will face No. 4 Magomed Magomedkerimov of Russia for the $1-million champion's cheque in the Oct. 27 final at the same venue.

The championship bout is a rematch of the 2018 final, won by Magomedkerimov (28-5-0) by first-round submission.

Cooper won the 2019 PFL title, defeating David Michaud. The organization went dark in 2020 due to the pandemic.

Unlike other mixed martial arts organizations, the PFL features a regular season and playoffs. The last man or woman standing in each of the PFL's six weight classes wins $1 million.

Fighters are awarded points for each bout during the regular season, ranging from three points for a win by decision to six for a first-round stoppage.

At six feet, MacDonald had a height advantage over the five-foot-seven Cooper. He also had a six-inch edge in reach.

But Cooper negated those advantages by turning it into a ground game.

MacDonald (22-8-1) tried for an early takedown in the first round with the two fighters in a prolonged clinch at the fence. When they moved away from the cage, Cooper got the upper hand and took MacDonald down. The stocky Cooper spent the rest of the round on top of MacDonald, trying to lock in a choke at the bell.

Cooper fought off an early takedown attempt in the second round, then grabbed a body lock on MacDonald and took him down at the fence. The referee stood the fighters up with 90 seconds remaining and they traded blows until Cooper took the Canadian down again.

It was more of the same in the third.

Cooper came out swinging and landed some shots early. The fight went back to the ground with Cooper ending up on top when MacDonald shot for a takedown.

Magomedkerimov won a unanimous (30-27, 30-27, 30-27) decision over alternate Sadibou Sy in the other welterweight semifinal at the Seminole Hard Rock Hotel and Casino. No. 1 Joao (The Brazilian Samurai) Zeferino was to have faced Magomedkerimov but had to drop out due to injury.

Sweden's Sy (9-6-2) stood fifth in the 10-fighter standings so he was the next contender in line.

MacDonald, a former UFC contender and Bellator champion, was coming off a controversial split decision loss to Gleison Tibau despite out-striking the veteran Brazilian 81-32 on June 17 in Atlantic City, N.J.

The 32 year-old from Montreal, by way of Kelowna, B.C., called it "a clear robbery."

MacDonald opened his PFL season in April with a first-round submission win over (Curtious) Curtis Millender. And despite the loss to Tibau, he qualified for the welterweight semifinals.

A victory over Tibau would have seen MacDonald clinch the top playoff seed. Instead he dropped to the second seed, which meant a matchup with Cooper.

The 28-year-old Cooper has now won his last five fights and is unbeaten in six (5-0-1). MacDonald has lost two of his last three and is 2-3-1 in his last six outings.

Radzhabov lost the 2019 final by unanimous decision to Brazil's Natan Schulte, a close friend and former training partner of Manfio.

On the undercard, Montreal lightweight Olivier Aubin-Mercier won a unanimous decision over American Darrell (The Saint) Horcher. The judges scored it 29-28, 30-26, 29-27 for Aubin-Mercier, who improved to 13-5-0 with his second straight PFL win after a 12-fight run (7-5-0) in the UFC.

Aubin-Mercier punished Horcher's lead leg with calf kicks early in the first round, leaving it red and lumpy. But Horcher (14-5-0) dropped the Canadian later in the round, catching him with a left to the head at the fence. Aubin-Mercier recovered and took Horcher down at the end of the round.

Aubin-Mercier took Horcher down again in the second and third rounds, controlling him for long stretches of time. Aubin-Mercier almost choked Horcher out at the end of the second round but the American fought him off.

Horcher (14-5-0) weighed in at 159 pounds, three pounds over the lightweight non-title limit. He went 1-3-0 in his UFC stint, losing his UFC debut to future champion Khabib Nurmagomedov.

The two other PFL post-season events are at the same Hollywood venue on Aug. 19 and 27.

The semifinal events for the heavyweights and women’s lightweights are set for Aug. 19 while the men’s featherweights and light-heavyweights go Aug. 27.

This report by The Canadian Press was first published Aug. 13, 2021