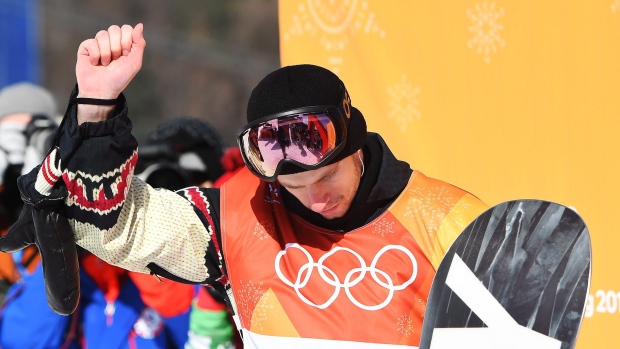 For Canadian snowboarder Max Parrot, being recognized alongside the likes of LeBron James and Rafael Nadal has been part shock and part inspiration.

Hearing he'd been nominated for "Comeback of the Year" at the Laureus World Sports Awards caught the reigning Olympic slopestyle silver medallist off guard.

"I kind of fell a little bit out of my chair when I heard because I was really not expecting to be nominated for such a prestigious award," said Parrot, one of six athletes nominated in the category.

“For me, just to receive that email a few weeks ago telling me that I had been nominated just meant the world to me. I was just super happy and motivated to keep on going.”

The nod comes in an unusual season for the 26-year-old native of Bromont, Que

After beating cancer, Parrot returned to the competition circuit in January 2020, only to see his season thrown off by the COVID-19 pandemic.

“It’s not an easy year. It’s really a different one. It’s more time at home, more time at training, less contests," he said. "We’ve been really shaken up this year. At first we had so many contests on the calendar and then no contests at all and now we have four contests in March. So everything just keeps changing.”

Parrot took gold in big air at a World Cup event in Austria on Jan. 9 and expected to compete at the X Games in Aspen, Colo., weeks later.

Then his COVID-19 test came back positive.

He was asymptomatic and felt fine physically. But watching his favourite competition unfold on TV was gutting.

Parrot grew up watching the X Games and had been competing at the annual event since he was 18. He's an eight-time champion, and the only time he'd missed out before was 2019 when he was fighting Hodgkin lymphoma.

This year was a completely different experience, he said.

Parrot says overcoming cancer and weathering uncertainty through the pandemic has made him stronger both mentally and physically.

"I have definitely grown a lot as a person. And as an athlete, but mostly as a person. I’m actually glad about that," he said.

Parrot has been working with a sports psychologist and using the time off of competitions to spend more time on the mountain. The extra work will help him become an even better snowboarder, he said.

“More time on the snow means more time practising my tricks, getting to learn new variations, new spins," he said. "So the more I spend time on my board, the better I get, so that’s definitely good.

To keep things interesting, Parrot took his board to the streets of Montreal. His Instagram shows videos of Parrot grinding concrete staircases in the snow and jumping rails next to brick walls.

He'd hoped to get some back-country boarding in, too, but a planned trip to Whistler, B.C., was scrubbed when plans solidified for the world championships in Aspen.

The competition is set to begin Wednesday with both big air and slopestyle competitions. A slopestyle World Cup is scheduled to follow at the same venue next week, with another event in Switzerland planned for later this month.

Though the calendar has filled, Parrot is tempering his expectations.

“I’m not getting too happy because I know it can still change. But we’ll go one contest by one contest. I’m just focusing on world championships for now," he said. "You can’t think too much long term.”

Like many athletes, the lack of competition has limited Parrot's ability to chalk up all-important points that could qualify him for the 2022 Olympics in Beijing.

“It’s going to be hard to make sure I have my spot by the end of the season because I didn’t have enough contests," said Parrot, who took silver in slopestyle at the Pyeongchang Games. "It’ll be the same for pretty much all the other guys in Canada and other countries. It’s just different.”

For now, he's trying to simply focus on one event at a time, starting with the world championships.

“One sure thing is if you go out there and make good results, you’re going to be in a good position," Parrot said. "That’s what I keep telling myself, just go out there and do your best and it’s going to help you.”

The Laureus World Sports Award will be presented virtually in May.