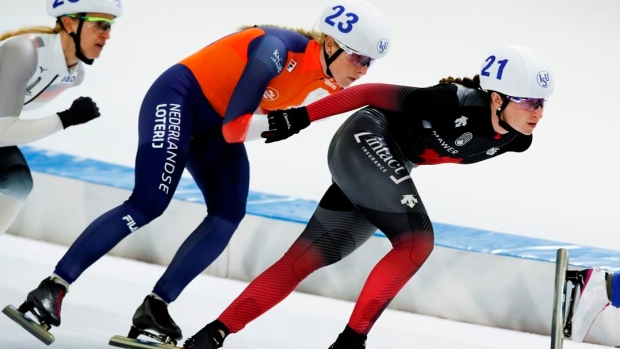 Blondin, an Ottawa native, was second in the women's mass start in eight minutes 43.260 seconds.

“I feel like I positioned myself well throughout the entire race," Blondin said. "Marijke ... had so much speed going into the last lap and I’m just not there yet right now. I’m still really happy with silver."

Dubreuil, a native of Levis, Que., who won 500-metre gold on Friday, added to his medal haul with a third-place finish in the men's 1,000.

"My race was good, but I didn't know if it would be enough," Dubreuil said. "Yesterday the time said it all. My time wouldn't have held up today if Thomas [Krol] hadn't had two false starts.

"I had a good race, but I was lucky that one of the three favorites got disqualified, which hardly ever happens. I’m proud of the job I did even if it wasn’t a perfect race."

This report by The Canadian Press was first published Feb. 13, 2021.