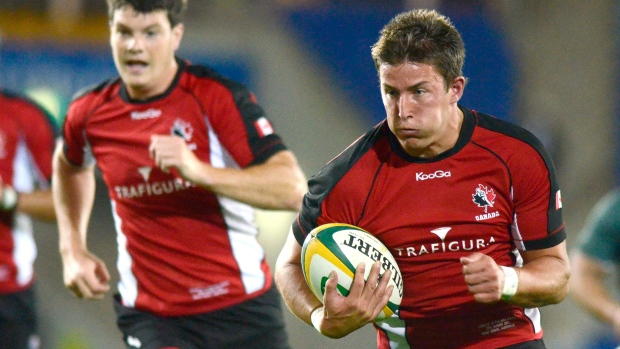 After arriving in Canada with his family from South Africa in 2003, DTH van der Merwe wasted little time hooking up with the Regina Rogues rugby club.

The 17-year-old promptly enrolled and played two games for the club one day after entering the country.

"As soon as I started doing a bit of homework on Canadian rugby, my allegiance switched immediately to wanting to become Canadian-qualified and play for Canada," he recalled in an interview.

Van der Merwe went on to play 61 times for Canada and became the country's all-time leading try-scorer with 38. He played in four World Cups, captained his country five times and dazzled spectators on many more occasions with his marauding runs down the wing.

"I believe it's time to sign off and let someone else fill that jersey and live that dream," he said in a social media posting. "Thank you Canada."

Van der Merwe scored many highlight-reel tries but the best may have come at the 2015 World Cup when he combined with Ciaran Hearn for a spectacular score against Italy that saw the winger fend off a string of would-be tacklers deep in the Canadian end after an Italy kickoff.

Van der Merwe had seen the Italians were narrow on their kickoff chase and told then-coach Kieran Crowley about the possibilities down the flank. Then he executed the vision.

It speaks volumes that while van der Merwe calls it his favourite try, he remembers the result more — Italy rallied to win 23-18.

"If I think of a favourite time, it's got to have to do something to with my whole team and not just my own personal accolades," he said.

He points to Canada's 25-20 victory over Tonga at the 2011 World Cup as a career highlight. "Something so so special," he said.

It was his only win in four trips to the tournament.

Canada's recent World Cup campaign in Japan was cut short as Typhoon Hagibis forced the cancellation of its final group game against Namibia on Oct. 13.

Van der Merwe acknowledges that the cancellation prompted him to — briefly — rethink his retirement plans. "Is this really the way I wanted it to end?" he thought.

He came to the conclusion that not everyone gets to write a fairy-tale ending to their career. "This is just the way mine was supposed to end," he said.

He was hoping to join a select band of players who have scored in four World Cups. But Canada registered just two tries in heavy losses to Italy, New Zealand and South Africa.

Van der Merwe will continue to play club rugby. He has one year left on his contract with the Glasgow Warriors and says he will look to keep playing after the season.

He is due to report back Monday to Glasgow, where he holds the club record for tries with 55 in 115 appearances.

"Hell of a career ... would have loved to play alongside of you for Canada," said former Canada captain Al Charron, a member of the World Rugby Hall of Fame.

"In my opinion you are the GOAT for Canadian rugby alongside the likes of Gareth (Rees), Ro Hindson & Gord MacKinnon."

Now in his second stint with Glasgow, van der Merwe has also played for Saracens and Newcastle Falcons in England and the Scarlets in Wales.

Van der Merwe was born and raised in Worcester, South Africa. His father, a doctor, brought his family of five to Saskatchewan for a better future.

After satisfying rugby's residency requirements, van der Merwe made his debut for Canada against Barbados in June 2006.

Five of his tries for Canada came at the repechage tournament last November in France when he helped the national side qualify for the World Cup with wins over Kenya, Germany and Hong Kong.

"That was tough times," he recalled. "Probably the darkest time of my career. It was just a matter of fact of where we are as a Canadian program. And then just the pressures of knowing that that's the last straw. If we don't qualify, what happens to this program? What happens to the youngsters? What happen to the grassroots levels in Canada?"

"It was a tough time in my career. I'm glad it's over. I'm glad we came out on top and I was able to play another World Cup," he added.

He sees the two-year-old Major League Rugby, the North American pro circuit, as a plus for Canadian rugby in the future. But he says the country needs more teams than just the Toronto Arrows.

"Home will always be Canada. We'll always come back when we're done with rugby," said van der Merwe, who sees the West Coast as his post-rugby destination for his wife and three kids.

He plans to start coaching part-time with GHA, a local Glasgow club, this season to see if he likes it.

Born April 28, he shares his birthday and name — Daniel Tailliferre Hauman — with his father. His dad was called DTH until university but became Danny when he became a doctor.

"I step away with many fond memories on and off the field," he wrote in his farewell posting. "Travelling the world, meeting new people, embracing different cultures are just some of the many blessing of playing this beautiful game."

Van der Merwe went on to thank his Canadian teammates for "all the awesome memories."

"I can truly say that in 13 years I only had great teammates," he said. "Guys I would do anything for."

He also thanked the Canadian fans, his family and wife Gill.