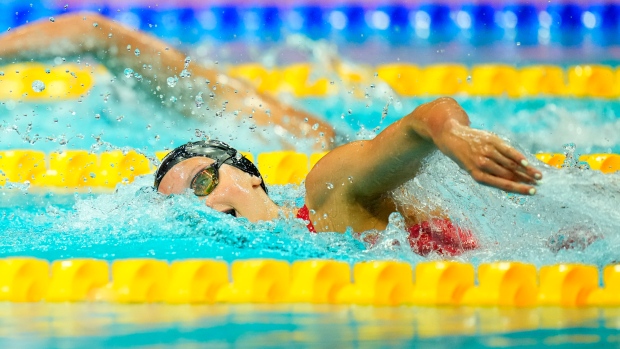 The 15-year-old was second to veteran swimmer Katie Ledecky of the U.S.

Ledecky defended her title in a time of three minutes 38.15 seconds ahead of McIntosh in 3:59.39, which was a Canadian record in the distance. American Leah Smith took bronze in 4:02.08.

McIntosh was the youngest athlete on the Canadian team in last summer's Olympic Games in Tokyo. At 14, she placed fourth in the 400 as well as fourth in the women's 4 x 200 freestyle relay.

She became the first Canadian woman to claim a world championship medal in the 400 freestyle and just the fourth in history to swim under the four-minute mark.

‘’I’ve definitely learned so much in the past year,’" McIntosh said ‘’(I learned) how to execute a 400 freestyle and I’m so happy with how I swam it. It’s given me a lot of confidence going into the next couple of races."

"’It’s a bit surreal,"’ McIntosh admitted. ‘’I used to find quotes from Katie Ledecky on the internet and make them into posters. It’s crazy. She’s definitely one of my idols and to be able to race her and to keep up to her as close as possible, it’s such cool experience I never thought I would have.’’

Oleksiak, whose triple-medal performance in Tokyo made her Canada's most decorated Olympian with a career seven, swam the anchor leg again.

"I was nervous, I haven’t seriously raced in awhile,’’ Oleksiak said. ‘’It was over so fast. Overall, I think we were feeling confident.’’

Canada finished 1.20 seconds behind the Aussies and over a second and a half ahead of bronze medallist U.S.

Oleksiak also achieved the benchmark of the most world championship medals won by a Canadian swimmer with her sixth.

Mac Neil, the reigning Olympic champion in the 100-metre butterfly, will swim only relays in Budapest. She was happy to be able to race Saturday,

‘’I had the biggest back spasm of my life yesterday. It was definitely scary,’’ Mac Neil said. "’But I knew I wanted to get better today and really quick so I could do it for these girls.’’

Canada won eight medals in the pool with two gold and six bronze, as well as an open-water bronze, in the 2019 world championship in South Korea.

On the seventh and final day of the world para swim championship in Madeira, Portugal, the Canadian team produced four medals to cap the meet with 18 (six gold, five silver, eight bronze).

Aurelie Rivard of Saint-Jean-sur-Richelieu, Que., was third in S10 100-metre backstroke as was Alec Elliot of Kitchener, Ont., in the same race on the men's side.

Rivard was also a double gold medallist in Madeira with victories in the 50- and 100-metre freestyle.

Canada's para swim team raked in the most medals at a single world championship since claiming 21 in 2010.

“A lot of these guys will go back and start training again, and next year we start counting toward the 2024 Paralympic Games in Paris," coach Mike Thompson said. "We can’t rest on these laurels. We have to continue to push, continue to get better.

"The first step is going to be trying to increase the team size that we’re bringing to Paris, and if we’re able to do that, we’re going to be in real good shape in 2024 and 2028.”

This report by The Canadian Press was first published June 18, 2022.