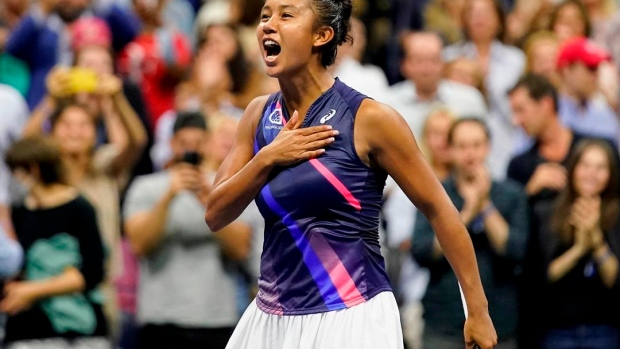 It's a match that will be appointment viewing for tennis fans across Canada.

Several viewing parties are planned -- including a Tennis Canada get-together in her native Montreal - to watch Leylah Fernandez play British teen Emma Raducanu this afternoon in the US Open women's singles final.

The 19-year-old Fernandez has enthralled the crowds in New York with her unexpected run to her first career Grand Slam final.

She was ranked 73rd in the world at the start of the tournament but has played like a seasoned veteran.

Her opponent is also an unexpected finalist -- 18-year-old Raducanu, the world No. 150, is a Toronto native who moved overseas to the London area at age two.

She needed to get through the qualifying rounds just to make it to the main draw. Raducanu has yet to lose a set in the tournament.

Fernandez is looking to become the first Canadian to win a Grand Slam singles title since Bianca Andreescu of Mississauga, Ont., won the US Open in 2019.

This report by The Canadian Press was first published Sept. 11, 2021.