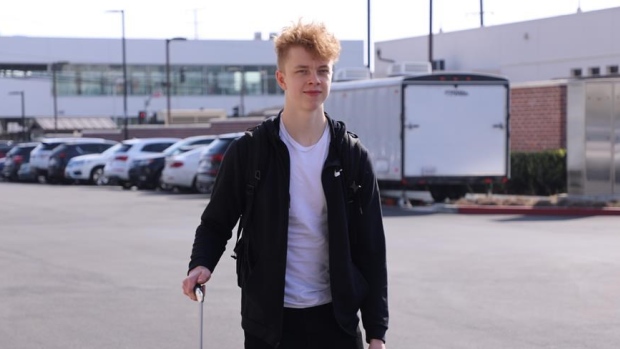 But with the NBA 2K League season suspended and Lakers Gaming equipment out of reach in the NBA team's closed training facility in El Segundo due to the COVID-19 outbreak, Valge-Saar is biding his time in California. Two of the Lakers' NBA players recently tested positive for the virus.

Valge-Saar, 18, isn't complaining about the inactivity. He's healthy — and still pinching himself.

"It's funny to think about it — I'm getting paid to play video games and all that," he said with a chuckle. "It's pretty interesting.

"If you had asked me a year or two ago, I'd never think I'd be doing this right now. It's crazy to think about."

His parents were supportive but somewhat skeptical to start.

"My mom really realized it was real when they flew me down to New York this year for the (Feb. 22) draft."

The 23-franchise esports league was slated to kick off its third season with a tipoff tournament on March 24. Regular-season games were scheduled to start April 1.

That has been postponed with teams instead competing in pre-season competitions remotely from their own markets.

Born in Calgary, Valge-Saar attended Ernest Manning High School with soccer and basketball a big part of his life growing up. A central midfielder with the Calgary Villains Soccer Club, the six-foot-two Valge-Saar had skills and helped his team win provincial titles.

He had planned to play soccer at university but "this was a really big opportunity for me." So he plans to treat 2020 and possibly 2021 as gap years and then might try to combine school with gaming.

Valge-Saar started playing the basketball video game for fun with friends when NBA 2K14 came out.

"I started getting pretty good at it around 2K18, 2K19. That's when I heard about the league — it started 2K18 and I started playing a little bit of competitive 2K. Then 2K19, that's the year it took off for me and I got my name out there."

A point guard in the game, he chose his gaming name from his initials (his middle name is Alexander).

Raptors Uprising GC, the gaming arm of Toronto's NBA franchise, had Valge-Saar on its radar. He has family in Toronto and played in several of the Raptors' local tournaments.

He took a "business decision" by opting to take a break from the game ahead of the draft, "because there were some teams lower in the draft that I would rather have played for that I felt had some more potential."

He was "super-excited" to go to the Lakers, a blue-chip franchise enjoying a renaissance with LeBron James and Anthony Davis leading the way.

Valge-Saar is staying in the residential wing of a hotel near the training centre, sharing digs with Lakers Gaming teammate Wady (Tactuk) Tactuk. The Canadian spent a week at the Lakers training facility before the virus lockdown and got to meet veteran guard Rajon Rondo, as well as see other players in action.

They have been told this week that opening the Lakers training facility could take anywhere from three days to three weeks.

"At least we've got a little bit of a timetable for when we're able to go back," Valge-Saar said. "But yeah, it's definitely frustrating that other teams are able to practise and play and get their chemistry and everything going. But I think we'll definitely catch up when we get all our stuff back."

The league, a joint venture between the NBA and game publisher Take-Two Interactive, will play games at the new NBA 2K League Studio in Manhattan once the season starts.

In the absence of regular-season play, the league is hosting the first-ever "NBA 2KL Three for All Showdown,” an online 3-on-3 tournament featuring fan-organized teams, top female 2K players and social media influencers, competing for the chance to play against NBA 2K League teams and a share of a US$25,000 prize pool.

The NBA 2K video game franchise has sold nearly 94 million units worldwide, including more than seven million units each for the past seven editions.

This report by The Canadian Press was first published March 26, 2020.