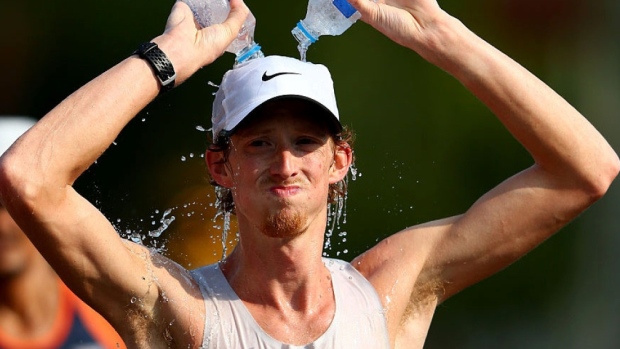 The latest sanctions levied against Russia by the World Anti-Doping Agency don't convince Canadian racewalker Evan Dunfee the field will be fair at next year's Summer Olympics.

WADA claims Russian state authorities tampered with the Moscow anti-doping laboratory database, but stopped short of barring athletes from that country from competing in Tokyo in 2020.

Russia's flag, name and anthem will not appear at the Tokyo Games, but as was the case in the 2018 Winter Games in Pyeongchang, South Korea, athletes from Russia will be able to compete as neutrals if they can prove they don't use performance-enhancing drugs.

"If I'm standing on the start line with a neutral athlete next to me, I'll have very little faith that they're clean," Dunfee told The Canadian Press on Monday. "I doubt this would change my opinion too much.

"While this is a good thing, it's certainly not enough and I don't know if it will have any impact. We've been down this road before without any impact. I'm skeptical whether this will create any meaningful change."

Among the punishments WADA imposed on Russia over the next four years — sure to be contested in the coming days at the Court of Arbitration for Sport — is stripping that country of world championships in Olympic sports.

The two women were among those calling for a complete ban of Russia from Olympic and Paralympic Games.

"It's important to read the fine print. What is being promoted as a ban is not really a ban," Scott said from Canmore, Alta.

"It's insufficient. It falls short of really coming down on the side of integrity in sport and clean athletes. It is not using or leveraging the power and authority that WADA did have to enforce or to call for a complete ban.

"I feel it fell short of expectations on the organization in light of the gravity of the offences and fraud and corruption we have seen over the last number of years."

Media reports and subsequent WADA investigations exposed Russian state-sponsored doping for the host team at the 2014 Winter Games in Sochi, throwing the International Olympic Committee and international sports federations into a tumult of what to do about it.

Providing a clean database to WADA was a requirement for the country's full reinstatement.

The IOC last month said "flagrant manipulation" of the data was "an insult to the sporting movement worldwide."

"What does someone honestly have to do then to get a full and complete ban?" Scott asked.

"If running a state-sponsored system of doping for years across all sports and making an absolute mockery of the anti-doping system and the rules and those who create and uphold them isn't enough then what is?"

Wickenheiser feels conflicted about a total ban of Russian athletes because she believes there are some who want to compete clean, but are victims of a system.

"I can live with the decision today," she said from Toronto. "I will say publicly I was in favour of a full ban because I think it sends the strongest of messages. Russia has had more than ample opportunity to comply and do the right things and they haven't for years now. This has gone on way too long.

"There's still part of me that believes there are clean athletes in Russia and they're caught up in the system. This leaves somewhat of a door open for those athletes that can prove they're clean and training outside of the system and then they would be allowed to compete under a neutral flag."

The world governing body of track and field (IAAF) made the decision to bar Russia from competing in athletics at the 2016 Summer Games in Rio.

At the past two track and field world championships, Russians competed as "Authorized Neutral Athlete" or an "ANA".

Dunfee, from Richmond, B.C., was fourth in the 50k in Rio and took bronze at this year's world championship.

"I was very proud to stand on that start line in Rio and know that I was competing against mostly a clean field, the cleanest field we'd probably had in a generation," Dunfee said.

Of 23 racewalkers currently serving doping-violation suspensions, a dozen are Russian according to Athletics Integrity Unit documents.

Canada's lugers finished fourth in three events in Sochi falling agonizingly short of the country's first medal in the sport.

In the weeks leading up to the 2018 Games, Russia's relay silver medal in 2014 was disqualified for doping violations — which would have upgraded Canada to bronze —but then reinstated upon appeal.

"It's a tough one," Edney said. "This is kind of what I would say is the minimum of what I was hoping for and what I think the world of sport deserves. I was looking for a complete ban and that's from what I think clean athletes, fans of sport and sponsors of sport, it's what they deserve."

"This is a fair option. Athletes that are clean — and I feel for those athletes because they are in a corrupt system and they've chosen the right thing, they've chosen integrity and the belief sport should be clean —it would be a disgrace to have their opportunity to compete on the world stage ripped off.

"But I've seen the other side of that. My opportunity to be on the world stage and stand on the podium was ripped off."

"The Canadian Olympic Committee supports the decision taken by WADA's executive committee to uphold recommendations to ban Russia for four years from major international sporting competitions, including the Olympic Games," the COC said Monday in a statement.

"The COC remains fully committed to clean sport. All athletes should be afforded the right to compete on a level playing field with all competitors abiding by the same rules, applied consistently."