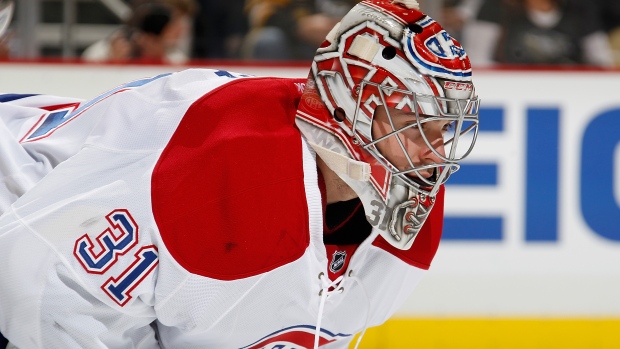 The award was handed out by an 11-person voting panel on Tuesday afternoon.

Price, 28, becomes the ninth hockey player to receive the award and the first since Sidney Crosby in 2009. He is the first goalie to win the award.

In June, the Vancouver native won both the Vezina Trophy and Hart Trophy, as the National Hockey League’s top goalie and player most valuable to his team, respectively.

Price was 44-16-6 last season in 66 games. His 44 victories were the most by a goalie in the Habs’ illustrious history. He also posted a goals against average of .196 and a save percentage of .933.

This season has seen Price limited to just 12 games with a knee injury. In the games he has played, he’s 10-2 with a 2.06 GAA and a .934 save percentage. He’s expected back in the Canadiens’ net in late January.

Special Olympian Jackie Barrett was a finalist for the award, after he set four records at the 2015 World Summer Games in powerlifting. The "Newfoundland Moose" won three gold medals for a total of 13 in a career that began in 1999. Barrett also won a silver at the 2015 Games. Barrett's records came in the squat, deadlift and combined bench press and dead lift categories, as well as the record for all three events combined.

The Toronto Star, which hosts the annual vote, reports the 2015 ballot was one of the closest in award history, with sprinter Andre De Grasse, basketball player Kia Nurse, soccer star Kadeisha Buchanan and track and field standouts Shawn Barber and Derek Drouin all garnering votes.

The exact voting results were not revealed, however some voters took to Twitter to release their ballots including TSN's James Duthie.