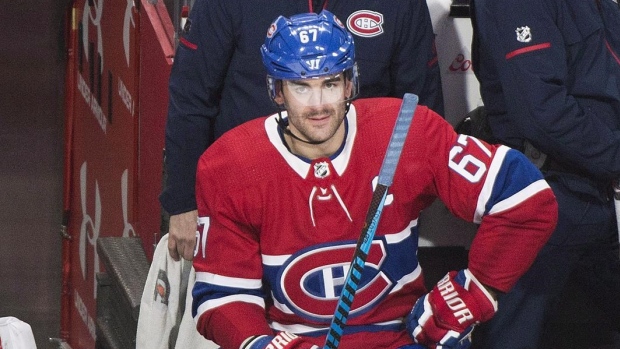 LAS VEGAS — Max Pacioretty is heading from the Original Six to the Sin City.

The Canadiens retained 10 per cent of Pacioretty's $4.5 million cap hit for this season in the deal, while the Golden Knights retained 9.43 per cent of Tatar's $5.3 million salary through 2020-21.

Reason for the precise salary retention percentage on Tatar is that it drops it a clean $500 k on the AAV so Tatar goes from $5.3 M aav to $4.8 M aav a year on the Montreal books

Vegas announced the deal, which sends the captain of one of hockey's oldest franchises to a club coming off a run to the Stanley Cup Finals in its inaugural season.

Pacioretty was named the Canadiens captain in 2015 and has played all 626 of his NHL games with Montreal. He recently denied reports that he had requested a trade. His name has been mentioned in trade speculation since last season's trade deadline.

The 29-year-old Pacioretty is entering the final season of a six-year deal that will pay him $4.5 million.

When the Canadiens visited Las Vegas in February, Pacioretty raved about the atmosphere at T-Mobile Arena.

"Best road game I've ever played in," Pacioretty said following a 6-3 defeat. "When you experience it for yourself, that was a treat to play, and I wish we played them more than once a year.

"It was unbelievable," he added. "Everything was top notch. Couldn't ask for better music, better atmosphere, better fans."

Pacioretty is also familiar with Golden Knights coach Gerard Gallant, who was an assistant coach under Montreal's Michel Therrien in 2012.

Tatar had 20 goals and 14 assists last season with Vegas and Detroit. The 27-year-old was acquired ahead of the trade deadline for a 2018 first-round pick (Joseph Veleno), a 2019 second-round pick and a 2021 third-round pick. He appeared in just eight playoff games during the Golden Knights' run to the Cup final, posting one goal and two points.

Also worth noting is that Tatar's contract was front-loaded; he made $6 M last year in total salary even though his aav was $5.3 M; it drops to $4.2 M in final year (or $3.8 M on Habs books) so if for whatever reason the Canadiens want to trade him at that point might be easier..

Suzuki, the 13th-overall pick in the 2017 draft by the Golden Knights, had just finished playing in his second rookie game in two days at the team's practice facility less than an hour before the announcement.