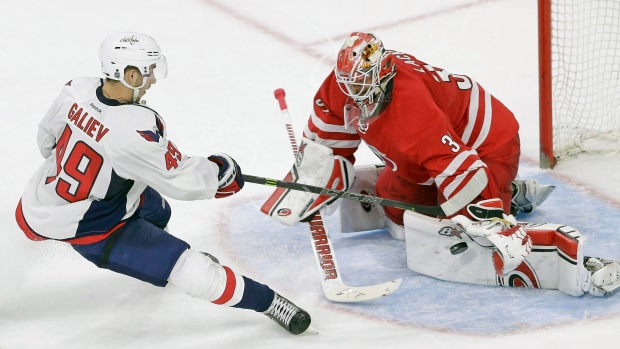 The Carolina Hurricanes announced on Saturday that the team had signed goaltender Eddie lack to a two-year extension. The deal will see the 27-year-old Swede earn $2.5 million in 2016-17 and $3 million in 2017-18.

“Eddie has been a great addition to our locker room,” said Hurricances general manager Ron Francis in a release. “We feel that we have a very solid tandem in net for this season and are excited that Eddie will remain a part of that picture beyond this year.”

The team acquired Lack prior to this past June's NHL Entry Draft from the Vancouver Canucks in exchange for a third-round pick in 2015 and a seventh-round selection next summer. The Canucks selected defenceman Guillaume Brisebois out of Acadie-Bathurst of the Quebec Major Junior Hockey League with the pick.

Lack originally signed with the Canucks as a free agent in April of 2010. He spent two seasons in the American Hockey League before making his NHL debut in the 2013-14 season and assumed the starter's role after the March trade of Roberto Luongo. Lack finished the season with a mark of 16-17-5 with a goals against average of 2.41 and a .912 save percentage in 41 games.

Last season, Lack was again relegated to back-up with the signing of Ryan Miller, but an injury to the American led to Lack again assuming the starter's position and helping the Canucks secure a playoff spot and a second-place finish in the Pacific Division. Lack appeared in 41 regular season games with a record 18-13-4, a 2.45 GAA and a .921 SV%.

In the playoffs, Lack was 1-3 with a 3.03 GAA and an .883 SV% in a six-game series loss to the Calgary Flames in the Western Conference quarterfinals.

A native of Norrtalje, Sweden, Lack is set to earn $1.3 million this season in the final year of a two-year deal signed with the Canucks.