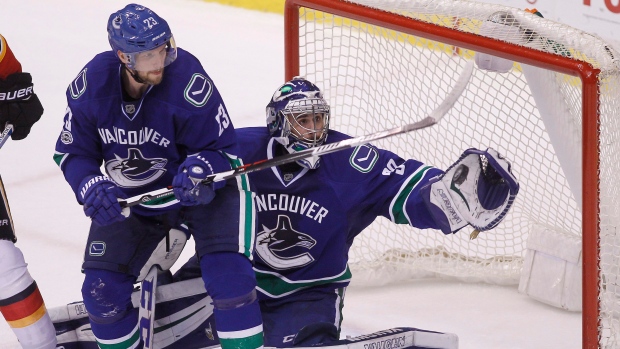 Edler and Miller , The Canadian Press

VANCOUVER — All the Vancouver Canucks can do this week is wait and hope.

The club began its NHL-mandated five-day break Monday after a hectic stretch that saw Vancouver conclude a six-game road trip, get 24 hours off and then play back-to-back nights at home.

Sitting four points adrift of the Calgary Flames for the second wild-card spot in the Western Conference, and with most of the other teams around them in the playoff chase also in action, the Canucks will be have a keen eye on the out-of-town scoreboard.

"We've put ourselves in a spot where we need other teams to lose," said Vancouver captain Henrik Sedin.

The Canucks ground out a 2-1 overtime victory Saturday against Calgary, but dropped a 3-2 decision to Philadelphia on Sunday where they found themselves down 3-0 early in the second period.

With 58 points through 60 games, Vancouver will probably need somewhere in the neighbourhood of 30 points from its final 22 contests to have any chance of making the post-season.

For a team that, apart from one six-game win streak, has only won four in a row once this season — and that included a shootout triumph and two overtime victories to open the schedule — it seems like a tall order.

"You look at the last road trip where we come away from that being 2-4 and it feels like we should have a couple more points," Sedin said Sunday night. "Great teams, they put six, seven, eight wins together. We've had a tough time doing that, but saying that we're still in the race.

"We're getting a few days off then we're back at it. Two, three wins and we're right there. That's the way we've got to look at it."

Part of the reason for Vancouver's inability to string together victories has been its putrid 28th-ranked power play and almost-as-bad 24th-ranked penalty kill.

The Canucks had just two shots in four power plays against the Flyers and also gave up two goals while shorthanded. All told, the team is 0 for 12 with the man advantage over its last four games and has surrendered four power-play goals against in its last three outings.

"We haven't quit yet," said goalie Ryan Miller. "We just have to keep building good games."

Vancouver will return to practice on Friday at 4 p.m. local time before hosting a Saturday night tilt against San Jose, winners of nine straight regular-season games at Rogers Arena dating back to January 2012.

Clubs coming off their bye weeks have preformed poorly — a combined 3-12-4 in the first game back — but Miller said the pause comes at a good time.

After the weekend meeting with the Sharks, the Canucks host Detroit on Feb. 28 in their last game before the NHL trade deadline on March 1.

With a couple of veterans who could garner interest, namely Miller and wingers Jannik Hansen and Alexandre Burrows, management doesn't have much time to decide if it will be a buyer or a seller.

Miller and Burrows are set to become unrestricted free agents this summer, while Hansen still has one year left on his deal. All three players have varying degrees of no-trade clauses written into their contracts.

But at least for now, the Canucks will sit back and see where they find themselves in the standings when the players reconvene Friday afternoon.

"We've got to relax, let the body recuperate," said defenceman Ben Hutton. "You can't do anything about it. All you can do is watch the highlights or check the scoreboard.

"At the end of the day we've just got to come back and do our part and get points."