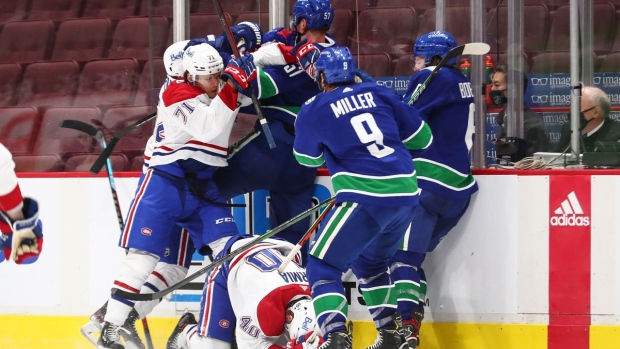 VANCOUVER – For the third time in four nights, the Vancouver Canucks (2-4) will face-off against the Montreal Canadiens (3-0-2) at Rogers Arena. The Canucks took Wednesday’s match-up 6-5 in a shootout while the Habs responded with a 7-3 win on Thursday. The Canucks have one win in their last five games while Montreal has won three of four and picked up at least a point in each of its first five games of the season.

Canucks captain Bo Horvat has scored a pair in each of the past two games and enters action with a share of the National Hockey League lead with five goals in the early going this season. Brandon Sutter scored the Canucks other goal on Thursday.

Concern continues to mount in Vancouver as Elias Pettersson has gone five games without hitting the scoresheet and has just a single point – an assist on opening night – to show for his first six outings. On Thursday, Pettersson did not register a shot and had just one attempt on goal. For the season, he is fifth on the team with 13 shots on goal through six games.

Braden Holtby is expected to get the start in goal. Holtby has both Canuck victories so far including Wednesday’s win over Montreal in which he made 31 saves through overtime and stopped three of four shootout attempts. With injuries to blueliners Alex Edler, Travis Hamonic and Jalen Chatfield, it’s expected that former Canadien Jordie Benn will draw in tonight. This will be his first game after starting the season in COVID protocol. If Edler is unable to play, either Guillaume Brisebois or rookie Jack Rathbone would likely be activated from the team’s taxi squad.

Overall, the Canucks need to shore up their defensive game. They have given up the most goals in the NHL (28) and are last in goals against per game (4.67).

The Canadiens are likely to make a couple of line-up changes for tonight’s game. Carey Price is expected to return to the net after backing-up Jake Allen on Thursday. Price gave up five goals and two more in the shootout on Wednesday. And veteran Corey Perry is expected to make his Montreal debut after signing with the team as a free agent. Perry will slot in for Joel Armia who suffered a concussion as result of a heavy hit from Tyler Myers late in Thursday’s contest. Paul Byron is listed as questionable after he was hit in the foot by a slap shot on Thursday night.

Former Canuck Tyler Toffoli has been the story of this mini-series to this point. He arrived in Vancouver without a goal and now has a share of the league-lead with five. After netting a hat trick on Wednesday, Toffoli added two more a night later. He also has an assist giving him 5+1=6 in the two games so far.

Jeff Petry (2+5=7) and Nick Suzuki (1+4=5) have both notched points in every Montreal game so far this season.

On Thursday, Montreal outshot Vancouver 42-17 including 18-3 in the second period. The Habs also outscored the Canucks 4-0 in that middle period.

After tonight, these teams will meet again to open February with a pair of games in Montreal. Habs captain Shea Weber is slated to play his 996th career NHL game tonight and is tracking to play his 1000th game when the Canucks are at Bell Centre on February 2nd.