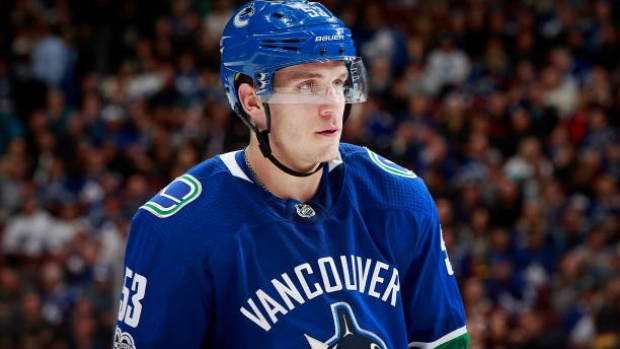 VANCOUVER – The Vancouver Canucks (14-16-4) are looking to extend a point streak to five games when they begin a five-game homestand against the Philadelphia Flyers (12-14-4) tonight at Rogers Arena.

The Canucks return from a road trip in which they picked up five of a possible six points. They are 3-0-1 in their past four games following a 4-3 overtime loss in Nashville on Thursday. Jay Beagle scored his first goal of the season while Brock Boeser and Bo Horvat scored in the final 4:05 to push the game past regulation time. Boeser’s goal was his first power play marker of the season after scoring 10 with the man-advantage as a rookie. Elias Pettersson had an assist on Boeser’s goal Thursday to extend his point streak to five games (three goals, eight assists).

After backing up Anders Nilsson on Thursday, Jacob Markstrom returns to the net tonight. He stopped 34 of 36 shots in a 3-2 win in Columbus and is on a personal three-game win streak during which he has stopped 82 of the last 88 shots he has faced (93.2 save percentage).

Adam Gaudette returns to the line-up after missing three games with an illness during which he lost 10 pounds. Erik Gudbranson hopes to play tonight after missing Thursday’s game with back spasms.

Canucks penalty killing, which has been an issue for the past six weeks, is eight for eight over the past four games. Not only were the Canuck penalty killers perfect in Nashville, they produced a pair of goals including the game-tying goal with just 44 seconds remaining in the third period. The Canucks have now scored as many short-handed goals (three) as power play goals in the past 10 games.

The Canucks have gained at least a point in six of their last nine games (4-3-2).

The Flyers are back in action following a 4-1 loss in Edmonton last night. Sean Couturier’s team-leading 13th goal of the season in third period broke up Mikko Koskinen’s shutout bid. At the other end of the ice, Anthony Stolarz made 18 saves in the Philadelphia net. With back-to-back games, it’s possible that Alex Lyon will get the call tonight. He has seen just 20 minutes of NHL action this season, surrendering four goals on 12 shots on Nov. 21st at Buffalo.

Dave Hakstol’s team has dropped three straight games as it works its way through Western Canada. The Flyers fell 7-1 in Winnipeg last Sunday, let a late two-goal lead slip away in a 6-5 overtime loss in Calgary on Wednesday before coming up short in Edmonton last night.

As a team, the Flyers lead the National Hockey League in face-off percentage at 55.1 per cent. Among players who have taken 300 or more draws this season, Giroux is third in the league at 58.1 per cent.

Philadelphia’s special teams are struggling. The power play is 1-for-21 (4.8 per cent) in the past 10 games. Only James Van Riemsdyk in Calgary has scored with the man-advantage since Nov. 21st. Overall, the club is 29th on the power play (13.5 per cent). And that’s the good news. The penalty kill sits 31st in the NHL at 73.0 per cent, however it has shown signs of improvement unit over the last nine games. The Flyers have successfully killed 23 of their last 27 penalties (85.1 per cent). The PK started the season 68.5 per cent (50-for-73) in the first 21 games.

These teams will conclude their season series in Philadelphia on Feb. 4th. They split their two games last season with each team winning on the road. Brock Boeser scored three of the six Canuck goals against the Flyers last season.