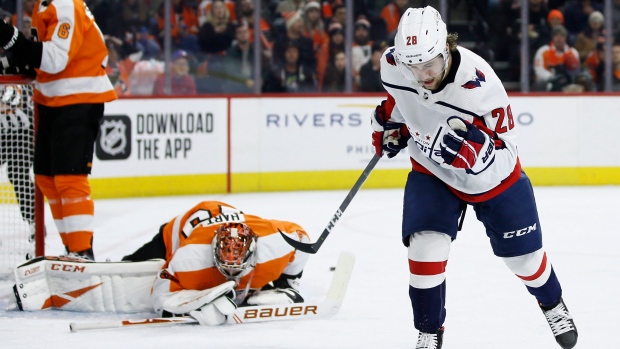 PHILADELPHIA — The Washington Capitals have a calm confidence in the game’s most tense moments.

T.J. Oshie and Evgeny Kuznetsov scored in a shootout to lift Washington over the Philadelphia Flyers 2-1 on Wednesday night.

Brendan Leipsic had a goal in the first period and Braden Holtby made 30 saves for the Capitals, who extended their point streak to 13 games (11-0-2) and increased their NHL-best total to 32 points.

“The talk on our bench is, ‘Who’s going to get the next goal? Let’s see who’s going to do it,’” Washington coach Todd Reirden said. “No one slams doors. No one breaks sticks. We believe in our system.”

Claude Giroux scored for the Flyers (10-5-3), who had won four straight. Philadelphia has earned at least one point in seven consecutive games (5-0-2).

Carter Hart made 35 saves in regulation and overtime, including several late highlight-reel stops, but the 21-year-old netminder couldn’t stop either Washington attempt in the shootout.

After Jakub Voracek missed high with a backhand, Oshie beat Hart through the legs. Giroux scored over Holtby’s left shoulder to tie it, but Kuznetsov followed with a forehand high into the net and the Capitals celebrated when Sean Couturier couldn’t convert in the third round for the Flyers.

“We’re finding ways to gather points,” Reirden said. “It felt like we deserved the two points.”

Giroux tied the game with 13:22 left in the third period on the power play after a nifty pass from Voracek in front of the net.

The Capitals had several chances to take the lead late, but Hart denied one quality chance after another.

“You need some saves and we got some saves,” Flyers coach Alain Vigneault said. “He’s doing a good job for us and helping give us a chance to be in games and win games, and that’s what you want from your goaltender.”

The Flyers goalie twice stopped John Carlson from close range with just under four minutes left in the third, denying both the initial shot and the rebound try. Tom Wilson had a great chance for Washington 43 seconds later, but Hart turned aside his backhand follow attempt from in front. Wilson had another high-quality chance with 35 seconds left in the third, but couldn’t beat Hart with a forehand.

“The second half of the third period we commanded play,” Reirden said. “That’s a strong mark of our team.”

Couturier had the best chance in the five-minute overtime, but his slap shot from the slot clanked off the right post. Alex Ovechkin provided the best opportunity for Washington, but couldn’t convert on a near-breakaway four minutes into the extra session.

Leipsic opened the scoring 6:13 in with his second goal of the season on a rebound after Hart saved Carlson’s initial shot from the point. Carlson upped his point total to 30 with his 22nd assist.

“The first period was one of our best periods of the year in terms of tilting the ice,” Reirden said.

NOTES: Washington LW Carl Hagelin (upper body) missed his third straight game. … It was the first of four meetings between the teams this season. … Philadelphia denied the Capitals on three power-play chances and has killed off 29 of 31 man advantages in the last 10 games.

Flyers: At the Ottawa Senators on Friday.