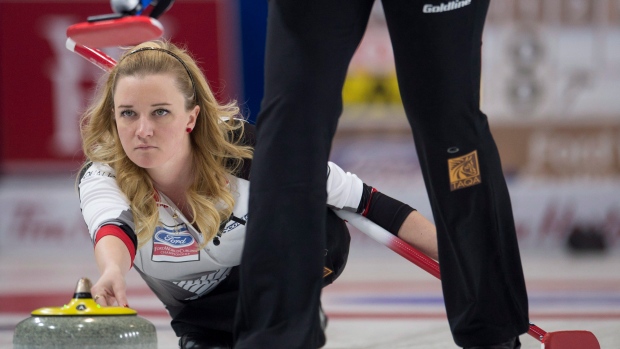 SWIFT CURRENT, Sask. - The mental game is everything at the women's curling world championships.

Canada's Chelsea Carey took advantage of a series of misplays by Finland's Oona Kauste for a 7-1 win in seven ends on Wednesday in Draw 14 of the international event. Carey's win came hours after she herself missed a game-winning shot in an upset loss to South Korea.

"Today we had like an hour to move on from the loss. That's difficult," said Carey after the win over Finland. "The girls were great to me and they rallied and all played really well in front of me in this second game which makes my job so much easier.

"When I miss a shot like that to lose a game earlier that helps my confidence to have simple shots and they did a great job of that."

Carey (7-2) rebounded from a frustrating 8-7 loss to South Korea's Ji Sun Kim in the afternoon draw. Looking for a simple takeout in the 10th end of that game, Carey threw through the house with South Korea sitting two, sealing Canada's loss.

Canada's skip looked much sharper in the evening draw with Finland. She opened with a deuce in the first end, then Canada stole a point in the second when Finland (1-8) rolled out on a hit attempt for a 3-0 lead. Kauste threw a blank in the third to keep the hammer but maintain the Canadian advantage.

Finland gave up another steal in the fourth, handing Canada a 4-0 lead. Then Kauste came up short on a draw in the fifth end, giving Canada a steal of one.

Kauste misfired again on her second-last rock of the sixth end, sailing her throw between two pairs of Canadian rocks. Holding the hammer, she could only whittle that down to two on her last throw for a 7-0 Canadian lead.

"We just need to forget this game and go on," said Kauste, wiping away tears. "I don't know what happened. We couldn't do any shots. We've played really good games, at least half of them.

"Tonight there weren't any good ends."

Finland scored its lone point in the seventh end before offering handshakes to Carey and her Calgary-based rink. By the end of the game the crowd — mainly Canadian fans — were cheering on Finland, encouraging Kauste on her shots.

Canada plays Japan's Satsuki Fujisawa on Thursday afternoon, then takes on Scotland's Eve Muirhead in the final game of the round-robin portion of the tournament.

"We're in a good place," said Carey. "If we split tomorrow we're in something, if we win both we're in a really good spot. Winning this game took the pressure off a little bit for tomorrow which is nice."

Earlier Wednesday, Carey was visibly upset after throwing the final rock of the game through the house with South Korea sitting two and coughing up the 8-7 loss.

"We can't do anything about it now," said Carey outside the locker-room immediately after the loss. "That game was ours to lose and I did that and it's my fault. I'll hopefully not make another stupid mistake like that."