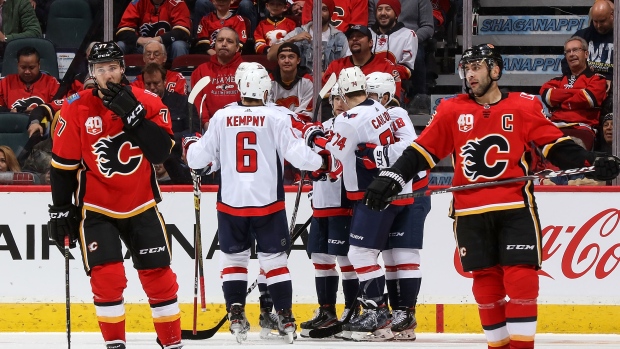 "Johnny for Norris. That's a hashtag right now," the Capitals captain said Tuesday after Carlson's two goals paced Washington to a 5-3 win over the Calgary Flames.

Carlson scored and added an empty-netter for an NHL-leading 20 points (five goals, 15 assists) in 11 games.

"It's a great thing obviously. I don't know what to say," Carlson said.

He has three games remaining this month to better the high of 25 points in 13 games set by MacInnis when he was a Calgary Flame.

Ovechkin had a goal and an assist and Tom Wilson also scored for Washington (7-2-2), while Chandler Stephenson got the credit on a Flames own-goal.

Elias Lindholm with his team-leading sixth goal, Tobias Rieder and Austin Czarnik countered for the Flames (5-5-1).

Cam Talbot stopped 25 shots in his second straight start of the season for Calgary.

The Capitals won their fourth in a row atop the Metropolitan Division, while the Flames suffered their first home loss in regulation this season.

"For good stretches of the game I felt we played well and carried the game, but ultimately it doesn't matter," Flames winger Matthew Tkachuk said. "We still didn't get any points tonight.

"They're a good hockey team, probably the best we've played this year. That was a good measuring-stick team.

"If we can take any positives it's that we carried stretches. I don't know the stats, but it's never a good thing when you're down going into the third. We had our chances, but not good enough."

Rieder scored with 16 seconds left in the game after Carlson's empty-netter at 18:15.

Wilson made it 4-2 on a feed from Lars Eller beating Talbot under his left pad at 12:34 of the third period.

Ten seconds after Czarnik pulled the Flames even at 2-2 in the second, Ovechkin quieted the Saddledome with a go-ahead goal at 16:35.

The Russian took a backhand dish from Nicklas Backstrom on a two-on-one and wired the puck home for his seventh goal of the season.

Czarnik scored his first pouncing on a loose puck and sweeping it past Holtby during a goal-mouth scramble for a T.J. Brodie rebound.

Trailing after two quick Washington goals in the first three minutes of the second period, Lindholm halved the deficit with a power-play goal at 3:19.

The Swede wristed a cross-ice feed from Johnny Gaudreau over Holtby's glove.

Stephenson's centring pass from behind Calgary's net deflected off Flames defenceman Rasmus Andersson and into the host team's net at 2:41.

Talbot mishandled Carlson's off-speed shot from the boards for Washington's first goal of the game 35 seconds into the period.

Calgary outshot the Caps 15-9 in a scoreless first period.

The Flames are at home to the Florida Panthers and Washington continues on the road against the Edmonton Oilers on Thursday.

Notes: Carlson is four points back of Kevin Hatcher (426) for the third-most points by a Capitals defenceman in franchise history. ... Ovechkin is four goals from passing Luc Robitaille (668) for 12th in all-time NHL scoring. ... Flames forward Sam Bennett was scratched a second straight game with an undisclosed injury.