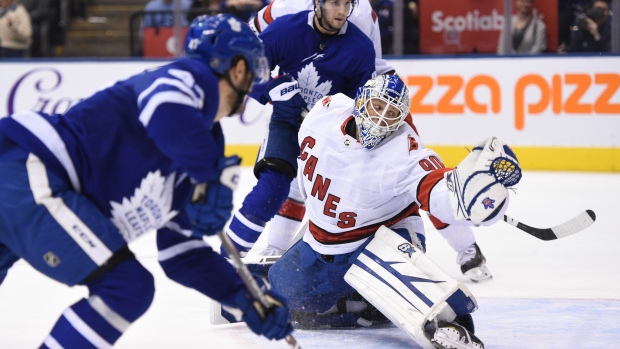 TORONTO – On a night to remember for emergency back-up goaltender David Ayres, the Maple Leafs played a game they’d give anything to forget.

It was midway through the second period on Saturday against Carolina that the 42-year-old Ayres, a third-string goalie at Scotiabank Arena for either team that requires one, was called into action for Carolina, tasked with facing a Leafs team he regularly practises with. And Ayres came away with the victory in his NHL debut, as Toronto imploded for a 6-3 defeat.

“It was a dogs**t effort by myself,” said Mitch Marner. “Too many turnovers, not enough zone time, just so many bad, bad things happened. Everything just seemed to go wrong. But now it's time to stop feeling sorry for ourselves. I'm taking a lot on myself for this sh** and I've got to be better.”

That sentiment extended across the board for Toronto, which felt its game was in trouble even before Ayres took over Carolina's cage.

An employee at Coca-Cola Coliseum, Ayres drives a Zamboni when he’s not tending net for the Leafs or Toronto Marlies at practices where the team’s starter needs a rest. He once backed up for Jonathan Bernier during a Marlies game against Rochester in 2015 and suited up for Toronto in its outdoor practice last month, but Ayres had otherwise been a rarely-seen presence in the background.

Until suddenly he was taking centre stage.

Midway through the middle frame on Saturday, Petr Mrazek went chasing after a loose puck above the left circle and was leveled by a punishing hit from Kyle Clifford. The veteran was at first assessed a five-minute major for clobbering Mrazek, but that was reduced to a two-minute minor for charging.

Mrazek was eventually able to skate off under his own power, but the situation left Carolina reeling. They had already lost one goaltender earlier in the game, when James Reimer was shaken up following a collision with Jaccob Slavin. Once it was clear Mrazek was also out for the duration, Ayres answered the bell.

A former Junior B goalie, Ayres’ own career was sidelined by a kidney issue that forced him to undergo a transplant in 2004. He had planned on playing in Texas’ Central League before becoming ill, and had once attended the San Jose Sharks Pro-Am camp.

The problem for Toronto was that despite holding a 1-0 lead after 20 minutes, it never did much after that to test the Hurricanes, a team galvanized not just by the loss of their two goalies but also defenceman Brett Pesce in the second.

Carolina fired 47 shots on Frederik Andersen, while the Leafs managed just 25 shots total the other way, and just 10 on Ayres.

“The reality is that the game really just stayed the same,” said Leafs’ head coach Sheldon Keefe of Ayres coming in. “We got a couple of shots in there [late] but when the goalie switch happened, I talked to the team and said if we don't change how we're playing, they don't even need a goalie. There's no chances, there was no shots, there's nothing happening. So they didn't need a goaltender the way the game was going.”

Toronto did manage to beat Ayres twice with the first two shots he faced in the NHL, one from John Tavares and then Pierre Engvall. But Ayres settled in after that, and the Leafs just kept getting worse, at even strength and with an abysmal power play that went 0-for-4.

“We obviously didn't handle the circumstances of the game very well,” said Tavares, who finished a minus-two. “Might have been our poorest night of execution. We were sloppy and our execution was extremely low. Just because of that [goalie] situation, it doesn't mean we have to change our game and overthink how we need to play. We just didn't come close to making it hard on them that way.”

That’s been a theme for the Leafs lately as losses have been piling up. Prior to Thursday’s impressive 4-0 win over Pittsburgh, Toronto had dropped two straight by a 5-2 score, and collected only one regulation win in its previous 10 games. In the victory over Pittsburgh, the Leafs were as good as they’ve been all season, only to follow it up with one of their worst showings.

“It's another embarrassing night,” said Keefe. “Embarrassing nights shock the system a little bit. We are a prideful team. But I think this game was different than the others. I don't think today was a lack of work ethic or anything like that, today was just our execution, we couldn't connect on a pass.”

Keefe said the Leafs' best players were far from being on top of their game against Carolina, a charge echoed amongst the club’s leadership group.

“It's just not good enough,” said Marner, who serves as an alternate captain. “I expect myself to be a lot better in these types of games. Knowing this was a big one, knowing that this team was going to come out like that, it's bulls*** on my part. Just using our willpower, that's something that wasn't there for myself tonight and I feel like a couple other guys, but it starts with myself, I'm supposed to be a leader and need to be way better than that.”

The time for talk is slowly dwindling for the Leafs now, as they cling to third place in the Atlantic Division with regular season games running out. If there’s a playoff future for Toronto this season, it will require establishing more consistency than any they’ve shown in recent weeks, and a far better performance than the one that hardly even challenged their practice goalie.

“It's on the players, it's on the leaders to pull the group up and get us out of this divot,” said Auston Matthews, another alternate captain. “It's up to us. We’ve got to go out there and play and obviously perform much better.”​

“Everyone just has to look themselves in the mirror,” added Marner. “It's do-or-die time.”