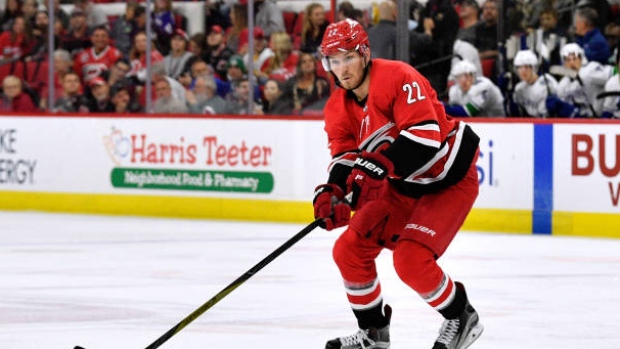 The Carolina Hurricanes announced that defenceman Brett Pesce underwent surgery on his right shoulder and is expected to be out four to six months.

Pesce injured his shoulder in the second period of Carolina' 6-3 win over the Toronto Maple Leafs on Feb. 22, leading the Hurricanes to acquire Brady Skjei and Sami Vatanen at the trade deadline.

Vatanen, however, was dealing with a lower-body injury at the time of the trade and suffered a setback on Thursday.

"This is a tough injury. He came off (the ice early); that's not good," Hurricanes head coach Rod Brind'Amour said. "We were hoping to get him closer to playing. Now it looks like he's further away."

The Hurricanes have dealt with injuries on defence throughout the season, with Dougie Hamilton already ruled out for the remainder of the year with a broken leg.

Vatanen last played on Feb. 1 while with the New Jersey Devils. The Hurricanes traded Janne Kuokkanen, Fredrik Claesson and a conditional fourth-round pick to acquire to acquire the pending unrestricted free agent.

"[Vatanen's] a piece, talking about injuries, to slide into one these holes we definitely have," Brind'Amour said, "but doesn't look like that's coming back any time soon."

Brett Pesce will miss the remainder of the season https://t.co/p15FB4TISY