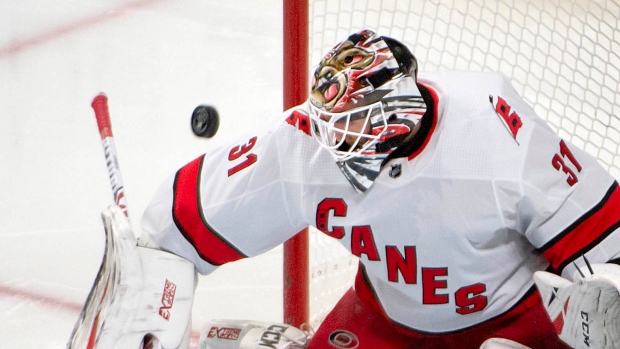 The Carolina Hurricanes placed goaltender Anton Forsberg back on waivers Thursday, two days after claiming him from the Edmonton Oilers.

Forsberg, who spent last season with the Hurricanes, signed a one-year, $700,000 deal with the Oilers in October.

TSN Hockey Insider Pierre LeBrun speculated Thursday the Oilers could be re-claim Forsberg, while also pointing out the Winnipeg Jets could have interest after losing Eric Comrie on waivers to the New Jersey Devils.

Decent chance of Carolina putting Anton Forsberg back on waivers at noon ET today after Alex Nedeljkovic cleared. If that happens, does Edmonton try to re-claim Forsberg on Friday? Or does Winnipeg jump in after losing Comrie?