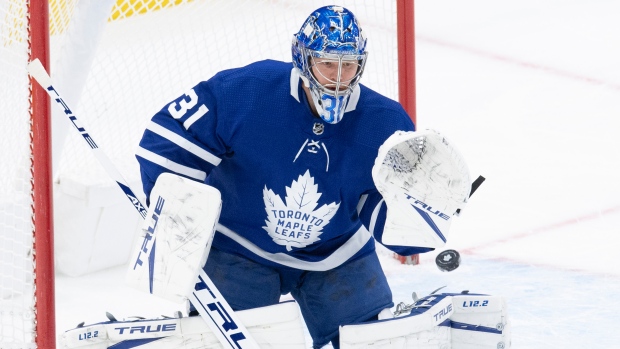 The Carolina Hurricanes have signed goaltender Frederik Andersen to a two-year, $9 million contract.

Freddie Andersen is coming to Raleigh!

DeAngelo, who last played for the Rangers in January, was bought out by New York earlier this month with one year left on his contract at a $4.8-million cap hit.

TSN Hockey Insider Darren Dreger reported in April that the 25-year-old defenceman rejected the Rangers’ offer to mutually terminate his contract, instead electing to be bought out this summer.

Earlier this season, former Rangers general manager Jeff Gorton said DeAngelo had played his last game for the team after he went unclaimed on waivers following a reported physical altercation with goaltender Alexandar Georgiev on Jan. 30, according to the New York Post's Larry Brooks. Gorton was fired in May.

He is coming off a five-year, $25-million contract signed with Toronto in 2016.

The Hurricanes drafted Andersen in 2010 and the Danish netminder re-entered the draft in 2012 after failing to come to terms on a contract. Anaheim drafted him 87th overall that year and Andersen played three seasons with Anaheim before being traded to Toronto for first- and second-round picks in 2016.​

The Hurricanes further bolstered their blue line on Wednesday by adding defenceman Ian Cole to a one-year, $2.9 million deal.

One year, $2.9M for Ian Cole signing in Carolina@TSNHockey @TheAthletic

Cole appeared in 52 games last season for the Minnesota Wild and scored one goal with seven assists.

Josh Leivo joined the Hurricanes on a one-year, $750 thousand deal on Wednesday.

$750k for Leivo in Carolina https://t.co/JIOAufqQop