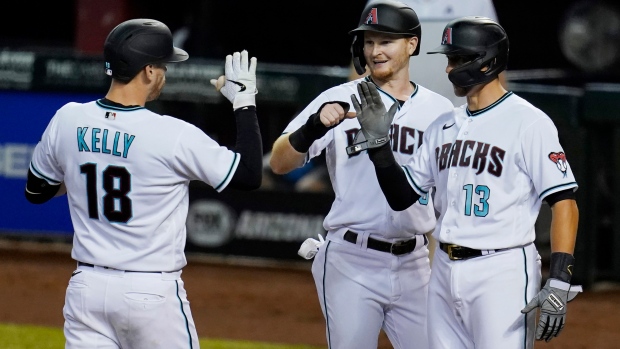 PHOENIX — Carson Kelly had a three-run homer, Caleb Smith and Riley Smith combined to throw a six-hitter and the Arizona Diamondbacks rolled to a 7-0 victory over the Texas Rangers on Tuesday night.

David Peralta had three hits, including a double. Eduardo Escobar added two singles and Nick Ahmed had a triple for the Diamondbacks.

The three-run homer was a good moment in a disappointing season for the 26-year-old Kelly, who emerged as Arizona's starting catcher in 2019. He's struggled at the plate and came into the game with a .194 average, but smashed a hanging slider over the left-centre field wall in the sixth inning to push the D-backs ahead 7-0.

“It felt really, really good,” Kelly said. “Guys on base, trying to drive something in the air.”

The Rangers have a 6-23 record on the road this season.

Caleb Smith had a rough start to the game, walking his first three batters to load the bases. The left-hander recovered to retire the next three batters on a popout and two strikeouts to escape without giving up a run.

“First three batters walk and bases loaded, nobody out, you think you’ve got a chance to do some damage there, and unfortunately we didn’t get it done," Texas manager Chris Woodward said. "And that kind of set the tone for the rest of the game.”

Smith cruised from that point forward, giving up one hit over four scoreless innings. The Diamondbacks acquired the 29-year-old as part of a midseason trade that sent outfielder Starling Marte to the Marlins.

Smith missed a large chunk of the season after a positive test for COVID-19 so the D-backs have brought him along slowly, limiting his pitch count during outings. Arizona hopes he can be part of a starting rotation next season that will likely include Madison Bumgarner, Luke Weaver and Zac Gallen.

Riley Smith (2-0) took over in the fifth and needed just 59 pitches — including 47 strikes — to finish the game. He struck out seven and gave up five hits over five innings. The 24th-round pick in the 2016 draft has been a pleasant surprise for the Diamondbacks, providing quality innings out of the bullpen.

His good impression puts him in the mix for a spot in next year's bullpen, but he's not getting ahead of himself.

“If you pitch good, then it puts you in a better spot,” Smith said. “If you pitch bad, it doesn't. I think that anything I can do to help the team obviously makes me more valuable as a pitcher. I consistently try to get out there and throw strikes, fill up the zone.”

Arizona jumped ahead 2-0 in the fourth inning after a run-scoring single by Peralta and a sacrifice fly from Pavin Smith. The Diamondbacks were helped when Texas pitcher Jordan Lyles dropped an underhanded toss from Sherten Apostel while covering first base.

Lyles' errant throw on a pickoff attempt in the fifth helped the D-backs push to a 3-0 lead. Arizona broke the game open in the sixth when the first four batters reached on hits, capped by Kelly's three-run homer.

Lyles (1-6) gave up seven runs, including four earned, on 10 hits over five innings.

The Rangers had a tough day in the field, matching a season high with three errors. Eli White had three hits and stole a base for Texas.

Rangers: LHP Wes Benjamin (1-1, 4.11 ERA) is scheduled to make his first MLB start on Wednesday. The 27-year-old has pitched in six games this season.

Diamondbacks: LHP Alex Young (2-4, 5.44) will make his seventh start of the season. He'll try to bounce back from his worst outing of the season after giving up six runs over 2 2/3 innings against the Angels on Sept. 17.