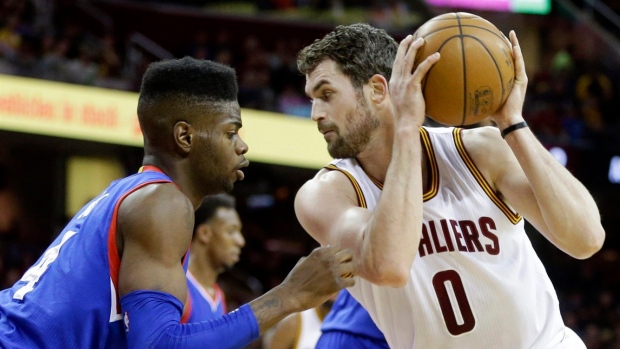 INDEPENDENCE, Ohio - Kevin Love spent all those long, losing seasons in Minnesota aching for a chance to be part of the NBA playoffs.

His first foray into them lasted less than four games.

Love sustained "extensive" damage in his left shoulder and will likely miss the remainder of Cleveland's playoff run, reducing The Cavs' "Big 3" to a twosome.

"We all have to pick our own game up," said LeBron James, who along with Love and Kyrie Irving formed a trio capable of ending the city's half-century title drought. "We can't fill Kevin's shoes, you can't do that, he's special for a reason."

Cavs general manager David Griffin said Tuesday the team doesn't expect Love to return. Cleveland is waiting to see if it will play Chicago or Milwaukee in the next round.

Griffin said the team is still gathering information and considering its options for treatment.

"Surgery is an option as well, if necessary. We're going to continue to look at that, but I don't want there to be any expectation on Kevin that he'll be back," he said. "I think it would be a real surprise if he we were able to participate in the post-season. I've still got a sliver of hope very late, but highly unlikely."

For Love, it's personally crushing. Considered one of the league's best "stretch" forwards, Love had finally joined a winner in Cleveland after six years with the Timberwolves, who never won more than 40 games with him.

This was Love's shot to show critics he could do more than just post impressive statistics for a lousy team, that he could help a team win it all.

The journey ended almost as fast as it started.

Love got hurt in Sunday's series-sweeping win over Boston when he got tangled with Celtics centre Kelly Olynyk while chasing a loose ball. Olynyk yanked down on Love's arm, popping it from the socket and sending Cleveland's big man running to the locker room for treatment.

Olynyk was suspended one game by the NBA. Griffin wouldn't go as far as calling Olynyk's play dirty, but he made it clear that he doesn't think it belonged in the game.

"It sickens me that a non-basketball play resulted in what it did," Griffin said. "This league is a no-excuses, give-no-quarter league. We just have to move on. It doesn't matter now."

Love scored 19 points in his playoff debut, 13 in Game 2 and scored 23 — making six 3-pointers — to help the Cavs open a 3-0 lead over the Celtics. He was on the floor for less than 7 minutes on Sunday before his harmful encounter with Olynyk.

James knows the road to a title will be tougher without Love, who averaged 16.4 points and 9.7 rebounds during the regular season.

"Obviously, he brings so much to our team offensively and defensively. It's a big blow for us. We've got to have guys step up. You never want to have one of your major role players out," James said. "Everyone has to pick up not what he was able to do, but they have to pick up what they are capable of doing."

Compounding the loss of Love for an extended period, the Cavs will also be without starting guard J.R. Smith for the first two games of their next series. Smith, who has been suspended six previous times during his career, was punished by the league for striking Boston's Jae Crowder in the face after the two were shoving each other for position under the basket.

Love's loss may be the biggest obstacle the Cavs have faced, but it's not the only one. Cleveland lost centre Anderson Varejao early on with a torn Achilles; the Cavs started 19-20; the roster was overhauled by trades; and first-year coach David Blatt's job was under scrutiny from the outset.

"Our guys have been locked in for quite some time now," Blatt said. "Everyone recognizes that we all have to pick it up. The next-man-up mentality is prevalent in our work and our feeling. We're hurting for what happened to Kev on a team level, on a personal level, but not discouraged to the point where we are any less ambitious and any less hungry to continue on this path."