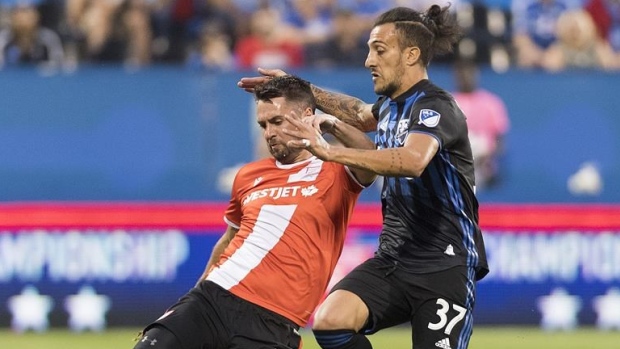 CALGARY — According to coach Tommy Wheeldon Jr., Calgary's Cavalry FC has nothing to lose and everything to gain.

After dropping the first leg of the Canadian Championship semifinal 2-1 on the road to the Montreal Impact last week, Cavalry FC will host the second and deciding game of the series at Spruce Meadows' ATCO Field on Wednesday.

For the Cavs to upset the higher-ranked Impact, Wheeldon said his squad will have to have a strong start.

"We've got to start well, get the crowd on our side," he said. "As long as we're in the game and it stays that one-goal game, we've always got a chance. We know the side we are. We'll always create our chance and we're very clinical when we have it, so we've just got to make sure we keep the game tight and cagey and stay in the game."

Impact coach Remi Garde is well aware of the implications of his more veteran squad going up against a Calgary club with nothing to lose.

"In this type of competition, when you play an away game against a team that is playing in a supposedly lower division, everything is gathered to be tough," said Garde, whose side still holds the upper hand heading into the finale of the two-game, total-goal series. "But we are professionals and this is the job we want to do."

Midfielder Sergio Camargo explained that all the Cavs need is one goal on Wednesday to advance to next month's Canadian Championship final against either Toronto FC or the Ottawa Fury, who also play the second leg of their semifinal series earlier on Wednesday at Toronto's BMO Field.

"It's simple, play our game and win 1-0," said Camargo, who scored Calgary's lone goal against Montreal. "That would be the easiest result for us to get to go through, so that's our game plan."

Since away goals are the first tie-breaker to determine which team advances in the case of a draw, Camargo's goal in the second half in Montreal last Wednesday was a big one.

"It was definitely a difficult game for us and to come out with the away goal was really important," said Cavalry FC goalkeeper Marco Carducci, who gave up two goals to Impact midfielder Ignacio Piatti while stopping seven other shots he faced. "We're definitely still in the fight. All things considered, we're pleased to be able to come back here with a good chance. From the first minute to the last, we're going to have to be ready for the fight."

While Piatti was the star for the Impact in the first leg, he won't be available for Montreal in the deciding game after re-aggravating a lower-body injury that kept him out of the lineup for an extended period earlier this season.

"He's good, but if the reports are true, I don't think he's travelled," said Wheeldon, while adding that the Impact have plenty of other offensive weapons including former Barcelona attacking midfielder Bojan Krkic. "I don't think they're struggling for replacements. Remi Garde is a very accomplished coach, Montreal Impact are a quality, quality team. We know we're going to have our hands full, but for us we enjoy those experiences. We enjoy being out of the comfort zone and to see what we've got."

Montreal midfielder Samuel Piette said that he and his Impact teammates are also up for the challenge.

GAME-TIME DECISIONS — Battling nagging injuries, midfielder Sergio Camargo and attacker Jordan Brown are both question marks as to whether they will suit up for Cavalry FC. "They'll have late fitness tests (on Wednesday)," said Cavalry coach Tommy Wheeldon Jr. "Fingers crossed, hopefully one, if not both, are available."

NO CAPTAIN, MY CAPTAIN — Cavalry captain Nikolas Ledgerwood will miss the game after being assessed two yellow cards during the first leg of the Canadian Championship semifinal series in Montreal.

HOME-FIELD ADVANTAGE — In their first season of existence, the Cavs have compiled an impressive 7-1-1 record at their 6,000-seat home venue at Spruce Meadows.

'KEEPER COMMENT — "We have 6,000 people, but it feels like quadruple the size of that," said Cavalry goalkeeper Marco Carducci of the atmosphere at ATCO Field. "It's so loud. It's amazing and full credit to the fans and the supporters for coming out and doing what they do."