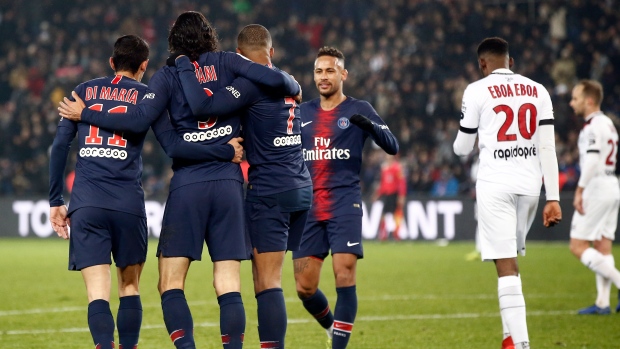 PSG, which has a huge tally of 62 goals in 19 games, is now 13 points ahead of second-place Lille with two matches in hand. However, the day was marred by a left-ankle injury suffered by midfielder Marco Verratti, who limped off after 18 minutes.

"I'm sad ... I think it's serious," coach Thomas Tuchel said. "It's possible he'll be out for a few weeks. He's gone to the hospital and we can't say anything more for the time being."

PSG, already depleted in midfield, travels to Manchester United in the first leg of their Champions League last-16 game on Feb. 12.

"I've never seen that, 9-0 in the league," he said. "We played with a lot of quality and got better as the game went on. We did things simply, quickly."

Neymar opened the scoring in the 12th after taking down a long pass from Dani Alves, cutting inside a defender and finishing sharply with his right foot.

He then set up Mbappe in the 37th after they swapped passes and his fellow striker side-footed the ball in.

Just before halftime, Mbappe grabbed his second after Cavani tackled defender Felix Eboa Eboa on the edge of the penalty area and the loose ball rolled to him.

Guingamp forward Marcus Thuram — son of France great Lilian — was occasionally a threat but it was a dominant first-half display by PSG.

After the break, Guingamp fell apart as Cavani netted a second-half treble, Neymar had a goal confirmed after video reviews showed it crossing the line, and Mbappe swept home from close range to get his hat trick.

Mbappe moved further ahead in the league scoring charts with a career-best 17; Cavani has 14 and Neymar 13.

Thierry Henry's coaching stint at Monaco is turning into a nightmare, after a 5-1 defeat by Strasbourg left his side in 19th place.

Henry's much-heralded recent signing Cesc Fabregas made his home debut but the former Arsenal, Barcelona and Chelsea star had a poor game, and carelessly gave the ball away for Strasbourg's third goal.

Monaco had centre half Naldo sent off after seven minutes and Strasbourg took advantage to move 2-0 ahead with headers from Ludovic Ajorque and Adrien Thomasson.

Radamel Falcao pulled a goal back in the 22nd minute and promptly broke down in tears, having recently lost his father.

After Fabregas was easily robbed of possession inside his penalty area in the 64th, the ball was played to Ibrahima Sissoko and he scored with a fine curling effort. Four minutes later, Ajorque claimed a fine solo goal and Youssouf Fofana made it 5-1.

Monaco's players went over to talk to some of their fans after the final whistle — a commonplace occurrence in the French league.

The win moved Strasbourg up to fifth place, while Patrick Vieira's Nice side is seventh after scraping a 1-1 draw at Reims thanks to a Remi Walter penalty in the ninth minute of injury time. It was given for handball following a video review.

In the other game, Toulouse won 1-0 at Nimes.

Third-placed Saint-Etienne is at home to local rival Lyon, which is fourth. Marseille looks to stop a poor run of form when it travels to Caen, while Montpellier can move into fifth spot if it wins at Rennes.