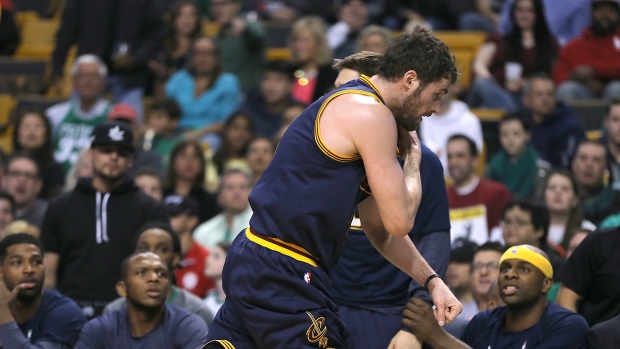 CLEVELAND - Kevin Love had surgery on his badly damaged left shoulder that could require six months of recovery, officially ending any remote chance he had of returning during Cleveland's playoff run.

Love, whose arm was yanked from the socket on Sunday by Boston's Kelly Olynyk during Game 4, had the operation at the Hospital for Special Surgery in New York on Wednesday. The team released a brief statement saying the forward had the procedure and that his projected recovery time is 4-to-6 months.

On Tuesday, Cavs general manager David Griffin said it was "highly unlikely" Love would return during the post-season. That distant possibility was erased by the surgery to a shoulder Griffin said sustained "extensive" damage. Love had ligaments in his shoulder torn on a play that has shaken Cleveland's championship hopes.

Love was battling for a loose ball when his arm got tangled with Olynyk midway through the first quarter of Cleveland's series-sweeping win over the Celtics. Olynyk pulled on Love's arm, causing the dislocation. Following the game, Love called the play "bush league" and said he was convinced Olynyk tried to hurt him intentionally.

Olynyk did not get called for a foul on the play, but the next day the NBA suspended him one game for his actions.

Love finally made it to the playoffs in his first season with Cleveland, which acquired him last summer in a trade from Minnesota. The seven-year veteran struggled at times during a bumpy year with the Cavs, who will face either Chicago or Milwaukee in the Eastern Conference semifinals starting next week.

But Love had become more of an offensive weapon in recent weeks, and now the Cavs have to chase a title without him.

Love can opt out of his contract this summer and become a free agent, but the 26-year-old has insisted he is happy with the Cavaliers.

With Love, LeBron James and Kyrie Irving, the Cavs have a core trio of stars who can keep them among the league's elite for years — as long as they can keep them together.

James said Tuesday that he didn't know what Love's plans are going forward, and now was not the time to consider anyone's future.

It will be tough for the Cavs to replace Love's points, rebounding and his ability to space the floor during the rest of this post-season. Love can shoot from the outside — he made six 3-pointers in Game 3 against Boston — and Cavs coach David Blatt may try to offset his loss by using a smaller lineup and giving more playing time to Mike Miller and James Jones, two proven deep shooters.