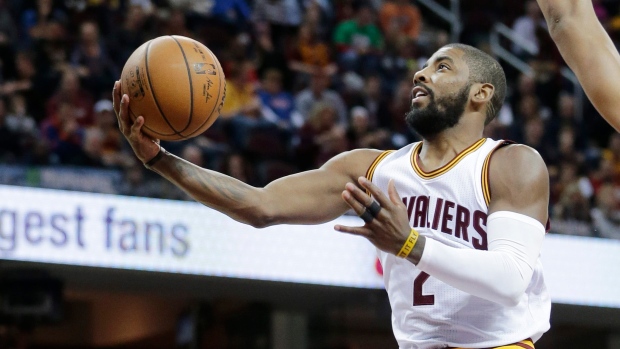 With Chris Brown's "Picture Me Rollin'" filling the locker room, Irving, James and Iman Shumpert bobbed their heads in unison and did some small dance moves.

Close to full strength, the Cavaliers are grooving again.

Irving scored 12 points and played 17 minutes in his season debut and James had 23, leading Cleveland to a 108-86 victory Sunday over the lowly Philadelphia 76ers, who lost their 10th straight and fell to 1-28.

Back on the floor for the first time since breaking his left kneecap in Game 1 of the NBA Finals, Irving showed some rust but that didn't matter.

"Kind of been a long, long road, but finally getting out there with my teammates was a pleasure," Irving said.

The Cavs managed to open the season 17-7 without Irving. But Cleveland is more complete with the All-Star point guard running its offence and being a headache for opposing defences. Now that Irving's back, the Cavs are as healthy as they've been since early in the playoffs last season.

Matthew Dellavedova made four 3-pointers and added 20 points for the Cavs, who improved to 12-1 at home and are eyeing a Christmas Day game against Golden State. James didn't play in the fourth quarter, logging a season-low 25 minutes.

Nerlens Noel had 15 points and 12 rebounds for the brutal Sixers, now 0-17 on the road and on their second double-digit losing streak.

The losing is taking its toll.

"Everybody's human," Noel said. "Everybody has their own frustrations, but you stay positive and do your best to keep working through it."

Irving received a warm ovation from the crowd during pregame introductions. He waved in appreciation and was cheered again as he dribbled up the floor for the first time, a sight Cleveland fans have been waiting months to see.

The Cavs ran a set play for him on their first possession, but Irving missed the layup.

"I didn't know I was going to be that open at the rim," Irving said before James reminded him of his gaffe.

"He tanked the layup!" James shouted.

Irving smiled at the playful ribbing.

"As you can hear, I did trick the first layup but it's OK, I'm not worried," he said. "It feels good, just getting this one out of the way."

Irving missed his first five shots before scoring on an uncontested layup after James made a steal near mid-court and fed his teammate. Following the assist, James walked over to Irving patted him on the head and said, "Welcome back."

"I was on my way to the rim and I saw Ky," James said. "He had missed his first couple shots and I was like the best way to come back is to get a layup, get an easy one and it was only right I was able to find him, welcoming him back the best way I know how."

The Cavs plan to ease Irving into the rotation, building up his stamina before extending his minutes. After he was taken out in the first quarter, Irving rode a stationary bike to stay loose.

Irving scored just two points in the first half, but had seven in the third quarter when he showed a couple moves that have made him one of the league's premier backcourt players. He made a signature crossover dribble and scored on a twisting layup before dropping a 3-pointer to give the Cavs a 62-40 lead.

Cavs coach David Blatt said the team's plans with Irving worked to perfection, but he wouldn't say when the guard's minutes will increase.

Philadelphia coach Brett Brown challenged his team to get tougher.

"The physical side of the game got the better of us in a big way," he said. "I sit on the sideline sometimes thinking I'm crying too much for fouls. You go back and look at it and they're not fouls. We get overwhelmed. There's a physical side right now we are lacking."

"We came out well," he said. "Like a lot of those teams they say 'enough's enough' and they get physical and our weaknesses at that point get exposed."

76ers: Brown coached Irving's father, Drederick, in Australia and has known the 23-year-old since "he was two days old." Brown unsuccessfully tried to recruit Irving for the Australian national team. ... Newly hired associate coach Mike D'Antoni will join the team on Philly's upcoming trip that starts Dec. 26 in Phoenix.

Cavaliers: The crowd roared when Browns quarterback Johnny Manziel's touchdown pass against Seattle was shown on the arena scoreboard. Fans gathered around TVs at halftime to catch up on the action. ... G Mo Williams missed his second straight game with a sprained right thumb. ... G Iman Shumpert returned after sitting out one game with a strained groin. He had three points in 15 minutes.