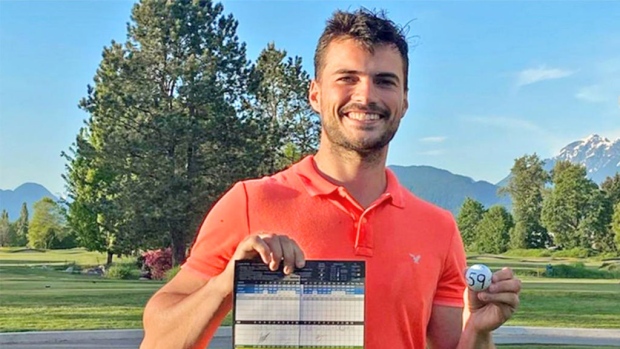 Michael Caan never saw his final putt go in the hole. He was too busy running to jump into the water to celebrate. You’re allowed to do that when you shoot 59.

Caan posted the magical score at Meadow Gardens Golf Club in Pitt Meadows, B.C., where he’s a member and the score and his splashing celebration have gone viral on social media.

“It’s crazy,” Caan said of the reaction to his celebration. “I’ve had people reach out from all over.”

Caan’s round started off well with a five-under front nine, but he didn’t contemplate breaking 60 until he added a birdie on 10 and an eagle on 11. He dropped a 10-foot birdie putt on 15 and realized that if he could play the last three holes in three under, 59 was possible.

“I missed a birdie putt on 16 and thought that maybe I’d lost the chance,” said Caan, a PGA of Canada professional who teaches at the Riverway Golf Course in Burnaby, B.C. “Then I rolled in a 30-footer for birdie on 17 and I knew I had a chance with a par-5 on 18.”

The final hole features a green protected by water and requires players to cross a bridge to get there. After hitting his ball to about 30 feet, Caan knew 59 was in play and as he walked across the bridge, the idea of jumping into the water came into his head. He admitted that he picked out a spot to splash if he was going to do it because the depth varies and he didn’t want to injure himself if he did eventually jump in.

With his partners recording on their phones, he struck his putt. As it got about halfway to the cup, Caan started walking towards the spot he’d selected.

“I just kind of blacked out,” he admitted. “I sort of lost control of my body. I could see it was on the right line.”

As the ball got closer, the walk turned into a jog and as soon as he heard his partners yell, he turned on the jets and jumped into the water.

“I didn’t even see it go into the cup,” he said. “I know it was moving pretty fast though.”

Caan can also thank the course’s COVID protocols for helping with his remarkable round. Normally, the Coquitlam, B.C., resident putts with the pin out but that’s not allowed during these pandemic times. He’s not sure if his ball would have dropped had it not hit the flagstick.

After climbing out of the water, Caan signed his scorecard and displayed it on his social media. The video of his putt and leap have made him a sensation and he’s had calls from press in the United Stated and beyond.

“It was quite a round,” he summed up.