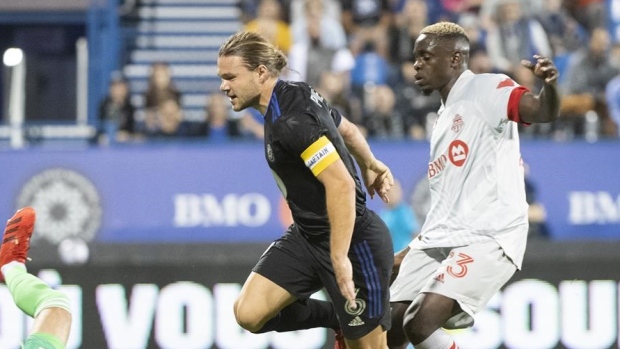 TORONTO — Thanks to a coin flip, CF Montreal will host the Canadian Championship final against Toronto FC on Nov. 21 at Stade Saputo.

Defending champion Montreal defeated Toronto in a penalty shootout in 2019, the last time the tournament was contested. The 2020 competition was derailed by the pandemic, eventually reduced to a one-off final between Toronto and Forge FC that has yet to be scheduled.

Toronto and Montreal will be bidding for the Voyageurs Cup and a berth in the Scotiabank CONCACAF Champions League, the flagship club competition in the region covering North and Central America and the Caribbean.

The winning MLS team also collects US$75,000 under the league's collective bargaining agreement.

CF Montreal said the venue was chosen by coin flip Tuesday, as per Canada Soccer rules given both clubs wanted to host the game. The match will be the latest in a calendar year ever played at Stade Saputo in club history.

Montreal advanced to the final by dispatching HFX Wanderers 3-1 in the quarterfinal and Forge in a marathon 11-round penalty shootout (8-7) in the semifinal. Toronto downed York United FC 4-0 and Pacific FC 2-1.

Canada Soccer had to wait until the weekend to see if Montreal made the MLS playoffs before it could set the date of the final. Montreal missed out, which allowed the championship game to go immediately after the current international window.