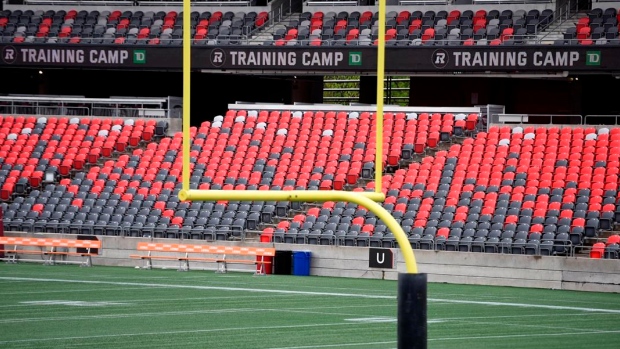 So, into uncharted waters we go.

It feels like we’ve already experienced nearly everything in the Canadian Football League. But a collective agreement rejected by the membership after being negotiated by its own bargaining committee and recommended by its player reps? Well, that is new.

Let’s quickly recap how we got here before we get into where we may be headed.

Just spoke to commissioner @RandyAmbrosie and got details on @CFL’s new offer to players:
— league provides $1 million ratification bonus to players. But removes $450k from 2022 cap and $675 in guarantees in ‘28. The ‘28 cap may not be affected if revenue sharing kicks-in#CFL

League also proposes moving back to ratio model of 6 true Canadians and one Naturalized American. (Which was in their May 14th proposal). #CFL #CFLPA

Ambrosie said if latest offer rejected and games are missed, offer will suffer. “There is no way we can get back to the quality of deal that we have on the table today.” #CFL #CFLPA

A rejection of the latest offer by @CFLPA and a decision to strike would result in teams no longer housing and feeding players. A rejection without a strike would see the league pull its offer and unclear where things would go from there.#CFL #CFLPA

CFL players went on strike May 14, the day before training camps were to open, rejecting the league’s latest offer. That deal had some significant gains for the players, but it also reduced the number of true Canadian starters from seven to six. (Three teams – Edmonton, Calgary and Montreal – continued to practise as they were not in a legal strike situation based on provincial law.)

Four days later, on May 18, the two sides came to a tentative agreement. The league improved its give to the players in several areas, but the ratio was rolled back, essentially from seven to five and a half – four full-time starter roles and three where players could be restricted to 51 per cent of snaps.

Essentially, the CFLPA agreed that up to three veteran American players could take up to 49 per cent of snaps of up to three Canadians. It sounds complicated but the net result is simple – more snaps for Americans and fewer for Canadians. And where playing time goes, money follows.

There has always been a low-grade tension between Canadian and American players in the CFL. Canadian players typically earn more doing the same job, because of the laws of supply and demand. Even some Canadian backups earn more than some American starters.

That’s why the CFLPA leadership has one of the toughest jobs in all of professional sports – it represents the interests of Canadian and American players, which don’t always line up. In fact, what’s good for one side is sometimes bad for the other.

So, it’s not hard to see why the ratio became the most divisive issue among players and why the perception is that Canadian players must have killed the deal.

The CFLPA also has the job of negotiating against a group of owners who collectively lose money, which is something their counterparts in the NFL, MLB, NBA and NHL don’t have to do.

Netting large financial gains against that backdrop is always going to be difficult.

Aside from the ratio, there was apparently a perception amongst some players that they would receive a ratification bonus, something that was, according to sources, never even brought up by either side at the negotiating table.

Where do we go from here?

CFL teams are practising on Tuesday, and the CFLPA has a new offer from the league in its hands.

The players will see the upcoming preseason games (which are scheduled to begin on Friday night) as an obvious leverage point, knowing that teams make good profit on those games where the players are not paid full wages.

Though emotions are running high on both sides, there’s huge interest for both sides to get a deal quickly and move on so that the season will not be interrupted.

If not, then who knows where things may go? Would the players go back on strike? Would the league opt to lock the players out, which is a complicated concept given that it is housing and feeding them right now – something it committed to do through the course of training camp, regardless of job action.

It's unlikely we get to more aggressive tactics, such as setting deadlines with threats to cancel segments of the season. Or the union starting to fly players home.

But few thought we’d ever get to this point.

CFLPA executive director Brian Ramsay was in his role when the last CBA was negotiated in 2019, and union president Soloman Elimimian took his position shortly thereafter. Both spent countless hours negotiating adjustments to that agreement, made necessary by the pandemic in 2020 and 2021.

They delivered a deal in which the league moved significantly in several areas it had previously been unwilling to go – partially guaranteed contracts, raising to the salary cap, revenue sharing and raises to the minimum salary.

But they and their player reps couldn’t sell it to their membership.

And now, it’s not wrong to suggest that the next 72 hours could be among the most important for the CFL in a very long time.