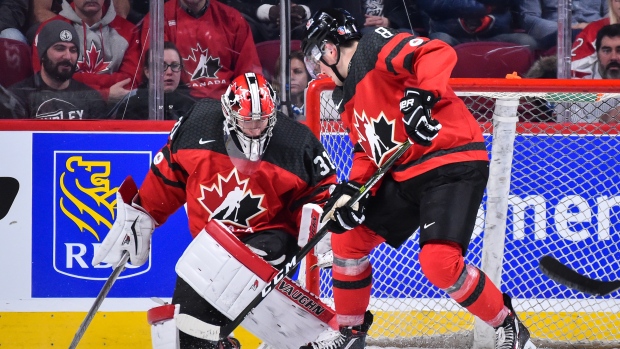 Make it a high five.

After Saturday night’s 7-5 win over Canada in the World Junior Summer Showcase in Plymouth, Mich., the United States has now beaten Canada five straight times in World Junior-level games. This marks an unprecedented streak of dominance for USA Hockey over their rivals from north of the 49th parallel.

Canada’s last victory over the United States was a 5-3 preliminary round win in the 2015 edition of the World Junior Hockey Championship in Montreal.

With a seeming inability to get the better of the hosts and defending champions at this December’s tournament in Buffalo (where Canada will meet the United States in the preliminary round on December 29 outdoors at New Era Field), head coach Dominique Ducharme and the rest of the Hockey Canada brain trust must look to assemble a squad that can get past not only the United States, but the rest of the field.

Bear in mind that the following team projections are made with the understanding that neither forward Nolan Patrick – the second overall pick in June’s 2017 NHL Entry Draft by the Philadelphia Flyers – nor forward Tyson Jost – the 10th overall selection by the Colorado Avalanche – will be made available by his respective NHL club.

That being said, it is worth considering the possibility that Patrick, who missed last season’s tournament and whose season with the Brandon Wheat Kings was limited to just 33 games due to injury, might be loaned to Canada for his World Juniors bow.