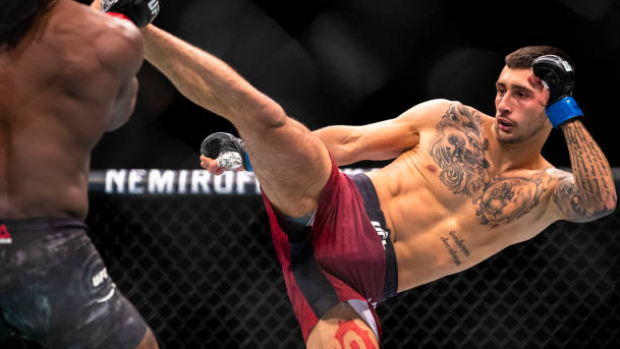 "Uncle Dana, that was a big performance for my fight," the 24-year-old Jourdain said in his post-fight interview in Busan, South Korea. "I would love that 50k bonus to move out of my parent's basement."

White obliged, with Jourdain and Choi each collecting a US$50,000 bonus for fight of the night.

So has Jourdain found his own place?

"No. Actually I did not, Most people when they ask me that question, I'm like laughing and I feel stupid abut it," said the native of Beloeil, Que.

But there's a reason.

"I'm looking to find some land because I want to build a house ... I need to stay close to Montreal but not too close," he explained.

Jourdain (10-2-0) looks to add to that down payment Saturday when he faces Andre (Touchy) Fili (20-7-0) on a televised card at the UFC's Apex production facility in Las Vegas.

A two-division champion in the Montreal-based TKO promotion prior to joining the UFC, Jourdain was originally signed to fight on the June 20 UFC card in Saskatoon that was cancelled due to the global pandemic.

The pandemic forced Jourdain to switch up his prep for the fight, working mostly with his younger brother Louis, a bantamweight TKO fighter whose nickname is the Mad Prince.

"I was training outside. I was literally wrestling outside, doing jiu-jitsu on the grass," said Charles Jourdain.

Jourdain may welcome the lack of fans Saturday. He fought in his opponent's home town in his first two UFC bouts, facing Choi in South Korea and Desmond (The Predator) Green in Rochester, N.Y.

Making his UFC debut on short notice and fighting in a different weight class, Jourdain lost a unanimous decision at lightweight to Green in May 2019. A more aggressive Jourdain survived some rocky moments in the first round to stop the highly touted Choi by second-round TKO.

Choi, who has won five bonuses in his six UFC fights, said later he broke a bone in his wrist in the first round. Blame Jourdain, who favours a kick to the forearm in borrowing a technique from Canadian kickboxer Simon (The One) Marcus.

An underdog in both of his UFC fights to date, Jourdain has never fought in an empty arena before.

"It will be like a hard sparring sessions but with no equipment — just mouthpieces and gloves," he said.

"It's going to be something new," added Jourdain, who has finished his opponents in all 10 wins. "I always someone who likes to please the crowd with my flashy style, with my 100 per cent ratio of finishes. It truly sucks that there won't be any people in the crowd, but a lot of viewers online."

Jourdain is a bundle of energy in the cage, with a penchant for flying knees.

In Fili, Jourdain is facing an opponent who at 29 has already had 14 UFC fights (8-6-0). A member of Sacramento's Team Alpha Male, Fili had fought 19 times and was in the UFC by the time Jourdain turned pro.

Fili credits MMA and his gym for helping turn his life around. When he first came to Team Alpha Male, he was under house arrest (for getting into a fight) and wearing a monitoring device on his ankle.

He told his probation officer that fighting was his job, so he was allowed to work out at the gym. Fili recalls not being able to throw left kicks for some three months because of his ankle bracelet.

While Fili lost a decision to 15th-ranked Yusuff last time out, he has won four of his last six including victories over Myles (Fury) Jury, Dennis (The Menace) Bermudez and Artem (The Russian Hammer) Lobov.

With a visa and letter from the UFC, Jourdain had no problems crossing the border en route to Vegas. The U.S. has exempted some foreign athletes competing south of the border.

He marvelled at the difference between the Montreal airport, which he called a ghost airport, and Charlotte, N.C., where he changed planes.

"People everywhere," he said. "It was insane."

Jourdain underwent a COVID-19 test Tuesday, then self-isolated in his hotel room while awaiting the results.

It helps that the UFC prepared meals for the fighters at their hotel.

Jourdain and Fili have politely sparred via social media, with Fili complimenting the Canadian's fighting skills while denigrating his trash-talking.

""You are a phenomenal fighter but you are in my way," said Jourdain. "Sorry buddy."