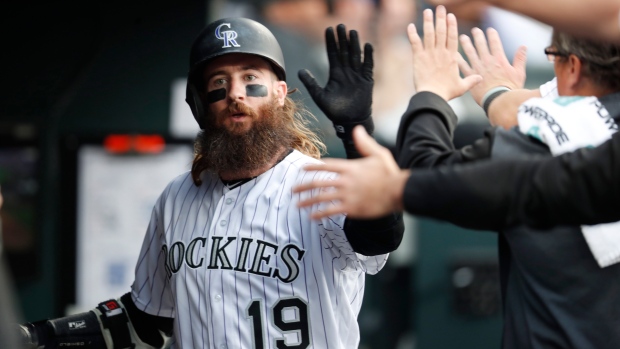 Blackmon became the first Rockies player to have three straight four-hit games and continued his torrid June. He is batting .500 in eight games since coming off the injured list.

San Diego third baseman Manny Machado had two hits and scored twice before being ejected by plate umpire Bill Welke in the fifth inning after a called third strike. Manager Andy Green and Matt Strahm, Thursday's starter, were ejected in the sixth.

Ian Kinsler had three hits and three RBIs for the Padres, who nearly rallied from a six-run deficit for the second straight night. They trailed 11-5 in the ninth Friday and went on to win in 12 innings.

They were behind 11-4 in the fifth Saturday after Desmond's fourth career grand slam, but made it a game on Eric Hosmer's three-run single in the sixth and an RBI double by Kinsler in the seventh.

Unlike Friday, however, the Rockies added to their lead on David Dahl's two-run triple and Desmond's sacrifice fly in the seventh.

Padres: Green said OF Franchy Cordero (right elbow strain) is idle after he left Wednesday's rehab assignment with a left leg injury. "He's not close to playing after that. I'm not sure how long he's out," Green said. "He's down."

Rockies: SS Trevor Story was in the lineup after suffering a forehead contusion in Friday night's loss. A grounder deflected off Story's glove and hit him above his left eye in the eighth inning and he left that game. He was 3 for 4 with two runs in the win Saturday night.

The Rockies also recalled a reliever, bringing up right-hander Jesus Tinoco from Triple-A Albuquerque and optioning Brendan Rodgers to Albuquerque. Rodgers was the club's top prospect when he was recalled and made his major league debut on May 17.