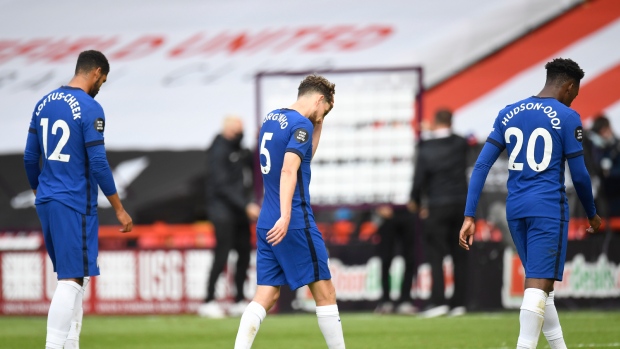 SHEFFIELD, England — Chelsea’s bid for Champions League qualification hit a bump in losing at Sheffield United 3-0, with striker David McGoldrick ending his 11-month wait for an English Premier League goal by scoring in each half on Saturday.

After 1,615 minutes on the field and 42 shots this season, McGoldrick finally found the net by tapping in a finish from close range in the 18th minute at an empty Bramall Lane.

After Oli McBurnie made it 2-0 in the 33rd, McGoldrick completed the latest impressive victory for a side in its first season back in the top flight by shooting past goalkeeper Kepa Arrizabalaga after a mistake by substitute Toni Rudiger.

Chelsea stayed in third place, but could get overtaken by Leicester and Manchester United if they win their games in hand over the next two days.

Fifth place will still secure a place in next season's Champions League if second-placed Manchester City fails in its bid to get a two-year European ban overturned in the courts. City will discover the result of its appeal on Monday.

“They were also stronger than us. With no crowd you can hear every voice. All I could hear were Sheffield United voices."

Sheffield United moved above Wolverhampton into sixth place in its attempt to secure Europa League qualification, a feat that would have seemed highly unlikely at the start of the season.

Chris Wilder's team has beaten Tottenham, Wolves and Chelsea over the past 10 days.

“We will never get carried away,” Wilder said. “That can be very dangerous. We are enjoying all this. My players have been outstanding.

“I will let others talk about Europe. If I hear any of my players saying it they get a rollicking. Here we are staying grounded.”