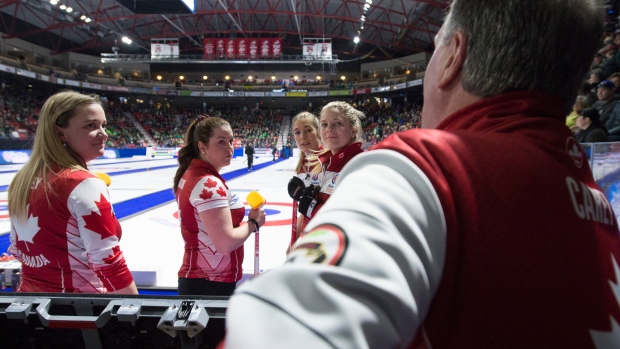 MOOSE JAW, Sask. — Curling being a sport of etiquette, a "shut up" uttered on ice level raises eyebrows that outright profanity in sports like hockey does not.

Dan Carey, who's coaching his daughter's team at the Canadian women's curling championship, has apologized for telling an official to "shut up" during a timeout Monday at Mosaic Place.

The exchange exposed a simmering frustration for curling coaches, however.

Chelsea Carey, who skips the defending champions, called a timeout in the ninth end of a 6-5 extra-end loss to Manitoba's Kerri Einarson.

Her father walked from the coach's bench at the home end of the ice to the away end to discuss the team's next move. He became annoyed when an umpire told him he was nearing the limit of his 90 seconds.

The exchange with the official was heard on the television broadcast.

Whether the consequences were more than an apology, Curling Canada would not say.

"Curling Canada's policy remains to not publicly announce punishments or fines to participants in events," the organization said Tuesday in a statement. "We do not condone the actions of the coach in this incident.

"The coach apologized in person to the official, and that the apology was accepted."

Each team is allowed two 90-second timeouts per game. The timeout clock starts running the moment a team signals for one.

A coach only has to walk a few steps to speak to the team at the home end, but walking to the other end of the sheet eats up valuable seconds.

"Maybe we've got to look at giving a little bit of time," Carey said Tuesday. "They don't want us to run. They want us all to be safe and I get that."

"Wait until you get there. That's how we used to do it."

Carey, 65, is a former Canadian champion who played third for Vic Peters in 1992.

"Certainly he didn't intend to upset anybody," his daughter Chelsea said. "He's not that kind of person.

"We still have concerns about the timing and the timeouts and how they're being handled. We don't think it's being done right. We get that it's volunteers and stuff, but it also is our livelihood here.

"He didn't get to say two words. So then what's the point of having a timeout? So that's where the frustration came from. It has been an issue all week and it was an issue in that situation."

Carey has the sympathy of Rick Lang, a three-time Canadian champion coaching Northern Ontario at the Scotties Tournament of Hearts.

An allowance needs to be made for timeouts called at the far end of the ice, he said.

"I just can't imagine another sport where it would be unequal like that from one end to the other," Lang stated. "There's a real flaw in the rule.

Teams get only one 60-second timeout per game, but the timeout clock doesn't start until the coach reaches the team.

Coaches can abuse that system, however, by dawdling and giving the curlers more time to talk amongst themselves.

"There's situations where a coach could get up and slowly take off their jacket," said Nolan Thiessen, Curling Canada's manager of championship services.

"There could be gamesmanship that could happen from a coach to ensure a team has extra time."

Thiessen said the timeout clock was applied properly in Carey's case, but the question of adding time will be reviewed at the end of the season.

"It's absolutely something we could do if we felt that was the right thing to do, but we will figure that out," Thiessen said.