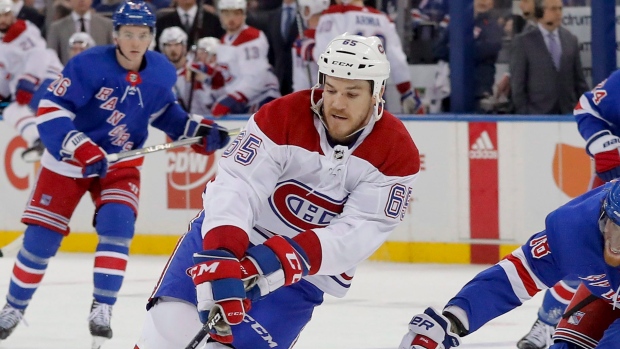 CHICAGO — Andrew Shaw is back in Chicago following a trade with Montreal last month, and the ever-chirping 28-year-old has been the toast of the team's annual fan convention this weekend.

The convention crowd erupted when Shaw — part of the Blackhawks' 2013 and 2015 Stanley Cup championship teams — was introduced at opening ceremonies Friday. On Saturday, he got a standing ovation as he arrived for his own "welcome back" session on the event's main stage.

"I have a lot of good memories here, but you want to make more," Shaw said. "I never wanted to leave. I always dreamt of coming back."

Shaw is generously listed at 5-foot-11 and 182 pounds, but Blackhawks management and players believe his grit and scrappiness will help return the retooled Blackhawks to the playoffs after a two-year absence.

"He's one of the great guys in the game," defenceman Brent Seabrook said. "He's one of those guys that always brings energy, whether it's on the ice or off the ice. You know you need those guys around to spark things.

"The season gets long. The season gets dragged out. You're in some dark cities, you know, snow and weather and all that kind of stuff, and then a guy like Shawzy really brings that energy, that fire."

As part of lowering their fat 3.55 goals-against average — second worst in the NHL last season — the Blackhawks want to be tougher to play against in 2019-20.

"We felt were missing maybe some sandpaper and little more of a north-south game where we finished hits more often," said Al MacIsaac, senior vice-president of hockey operations. "Andrew Shaw, as we all know, has that personality on and off the ice."

Shaw had 16 goals and 19 assists in 67 post-season games during his previous five-year stint with Chicago, including one of the most memorable plays in franchise history. He was credited with a goal in the third overtime of Game 1 of the 2013 Stanley Cup Finals against Boston when the puck went off his right shin pad and into the net.

During the celebration, Shaw hollered "I love shin pads," a line that sticks with him and epitomizes his style.

"(Former teammate) Bryan Bickell used to give me a hard time," Shaw said. "He said I never scored a goal with my stick. It was always off my body."

Shaw jumped in a goalmouth scramble and knocked the puck into the net with a soccer-style header in a game at Anaheim in the Western Conference Final 2015. The goal was disallowed, although Shaw celebrated in an attempt to sell it.

The Blackhawks sent Shaw to the Canadiens in June 2016 for a second-round, 39th overall draft pick used to select 21-year-old sniper and budding star Alex DeBrincat.

DeBrincat had 41 goals in his second NHL season in 2018-19. Shaw has never scored more than 20, and last year had 19 as he notched a career-high 47 points with Montreal.

"I feel like I still have a lot to give," Shaw said. "I came off a pretty good year and I'm excited. I'm feeling healthy. I'm feeling energized.

"To come back to a city that's given me so much love and help me grow into who I am, it's nothing but smiles."

Shaw promised fans he'll be as annoying as possible and maybe a little dirty to opponents.

And he'll save his best for the Central Division rival and Stanley Cup champion St. Louis, even if Blues goalie Jordan Binnington is a friend.

"I can't wait to beat up on the Blues," Shaw said.

HE SAID IT: Owner Rocky Wirtz also got a standing ovation when introduced on stage at a session on Saturday. By contrast his late father, Bill, was booed loudly whenever he made a public appearance.

"Everywhere he goes, he gets a standing ovation," team president John McDonough said.

"Even in the washroom," Wirtz quipped.