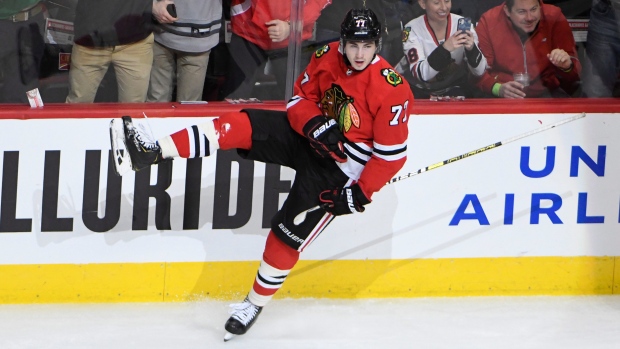 The Chicago Blackhawks will not release forward Kirby Dach to play for Canada at the World Junior Championship, according to TSN Hockey Insider Bob McKenzie.

CHI will NOT be releasing Kirby Dach to Team CAN. He will remain with the NHL club.

Dach has played in 26 games this season for the Blackhawks and has five goals and five assists with six penalty minutes and is a minus-2.

The 18-year-old was selected in the first round, third overall by the Blackhawks at the 2019 NHL Draft.

The news comes after Canada received a boost from the Arizona Coyotes who agreed to loan Barrett Hayton to the national team.

Team CAN must still release one forward. Fourteen will be on today’s flight to Europe. CAN has pre-tourney games on the 19th and 23rd. Final roster submitted Christmas Day.

Canada still has to release one forward from their roster ahead of the final roster deadline on Christmas Day.

Team CAN is waiting to make sure Aidan Dudas (LAK/Owen Sound), who has been sidelined with a hand injury, is cleared to play. If so, Team CAN expected to release one of the other forwards.

According to McKenzie, the team is still evaluating the health of Los Angeles Kings prospect Aidan Dudas, who has been sidelined with a hand injury.