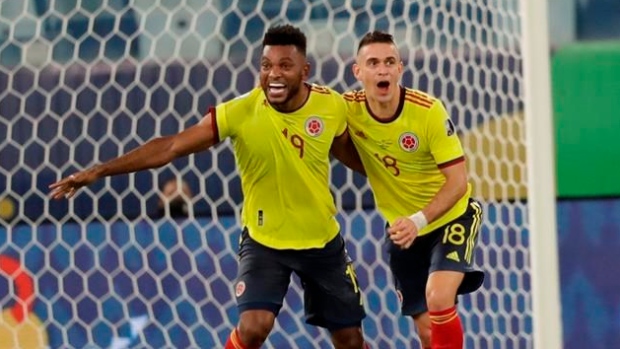 CUIABA, Brazil (AP) — A surprising choreographed move gave Colombia a 1-0 win against Ecuador on Sunday in its first match of Copa America.

Edwin Cardona was the scored the winner at the Arena Pantanal in Cuiabá in the 42nd minute of a tense game.

The decisive moment started when midfielder Cardona took a free kick close to the edge of the Ecuadorian penalty box. Instead of shooting, he exchanged three short passes with Juan Guillermo Cuadrado, who moved the ball forward to where Miguel Borja was waiting.

Borja headed the ball back to Cardona, who had run toward goalkeeper Pedro Ortiz and who scored with a right-foot shot as the Ecuadorian defenders watched on. The move had to be validated by video review.

“The play of our goal has been worked on by our players since the ... World Cup qualifiers,” Colombia coach Reinaldo Rueda said.

The previous encounter between these teams ended 6-1 to Ecuador seven months ago in a World Cup qualifying game. Carlos Queiroz was fired as head coach after that heavy defeat. Sunday's win was the second in three matches for Rueda, who replaced Queiroz.

The win against Ecuador was a further boost for Rueda, who has made some contention decisions early in his tenure, including the call to leave star midfielder James Rodriguez out of the Copa America squad.

The result also eases some of the tension in the squad after Colombia's soccer federation on Sunday said two members of the coaching staff had tested positive for COVID-19. Technical assistant Pablo Román and physiotherapist Carlos Entrena are in good health, the national team said in a statement.

Colombia shares the Group B lead with Brazil, although the tournament host and defending champions are ahead on goal difference.