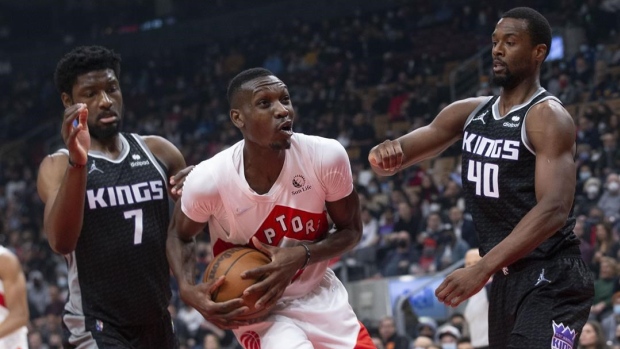 In basketball years, it feels like he’s a lot younger, though. He was a late bloomer, picking up the sport as a teenager in Montreal. A torn ACL in his final season at Oregon set him back, costing him a chance at getting drafted and delaying the start of his pro career. He didn’t play his first NBA game until he was 25, and after a pair of two-way deals, one with Golden State and the other with Toronto, he didn’t sign his first big contract until just before his breakout 2020-21 campaign.

He’s still learning himself as a player and figuring out where he fits in this crazy league, which is OK, especially when you consider how far he’s come to get here. It’s never too late to find your niche, but he’s working on it, and he’s closer than ever before.

“At this point, I just want to go out there and play hard, that’s what the team needs,” Boucher said, following his club’s spirited 99-95 loss to the first-place Phoenix Suns on Tuesday. “It’s a lot easier when you know what you’ve got to do, and I go into the game thinking the same way… I’m just trying to bring energy and effort.”

In his defence, Boucher’s had to wear many hats over the last couple seasons, making it tough to get comfortable in any of them. A year ago, he was playing big minutes and putting up career numbers for a bad Raptors team in Tampa, while being miscast as a centre in undersized units. Then, with the team battling injuries and getting over a COVID outbreak last month – Boucher is the only player on the regular roster who hasn’t spent time in the health and safety protocols – he picked up a few spot starts.

Now that they’re healthy, or close to it, Boucher has gone back to the bench but, to his credit, he’s embraced the change. In fact, more than anybody else, he’s benefited from the role certainty.

He knows what’s needed from him and when, and they’re not asking him to go outside of his comfort zone or do more than he should be doing. The job description is simple in theory, but far more difficult to execute. It’s an exhausting gig, and you can see its toll whenever he finally runs out of gas and collapses into the bench after a long shift. But while he’s out there, Boucher’s goal is to make the most of his minutes the best way he knows how. He’s tasked with coming in and changing the game with effort plays – running the floor, crashing the glass, and altering or blocking shots.

“He mentally handled it well to go back [to the bench],” Nick Nurse said. “But [when] we call his number, he sprints up to the scorer’s table and sprints out onto the floor and starts playing hard.”

“It’s a role perfectly suited for [Boucher] and [his] game and [his] personality. Can you impact [the game] from that role? That’s what he’s been doing, and that’s great to see.”

Although his numbers don’t always reflect it – he’s playing fewer minutes and taking fewer shots – Boucher’s playing his best basketball of the season, and maybe his best ball ever. Part of it is just simplifying his game. He’s got a unique skill set and can do a lot of different things on the floor, and he’s never been shy offensively. But with age and experience, he’s learning discipline. The first shot isn’t always the best shot. Uncharacteristically, in Sunday’s win over New Orleans, Boucher turned down a semi-contested look at the top of the arc to make the extra pass and find a wide-open Scottie Barnes, who knocked down a three-pointer from the corner.

That’s the next step in Boucher’s evolution as a player, understanding that he can make an impact without scoring or even taking a shot. He’s still searching for his jumper. He’s hit one of his last 14 three-point attempts and is shooting 23 per cent from beyond the arc after hitting 38 per cent of his threes a year ago. The difference now, compared to earlier in the season, is that he’s not relying on it.

“I’m just focused on doing the other things,” Boucher said. “At first it was like I need to hit the three to be happy, but right now, I’m blocking shots, getting steals, and it makes me feel the same way [knowing] it helps the team a lot more.”

He scored just six points in that Pelicans game, but pulled down eight boards and kept possessions alive by tipping the ball out to teammates. As a reward for his efforts, Nurse had him on the floor to close the game in place of the rookie Barnes.

With Barnes out of the lineup nursing a sore knee on Tuesday, Boucher logged 37 minutes off the bench. As a team, the Raptors shot just 40 per cent, including 8-for-37 from three-point range, but their 22 offensive rebounds kept them in the game. Boucher was responsible for nine of them, and grabbed 16 boards overall to go along with 13 points and three blocks.

Boucher is one of seven NBA players to collect at least nine offensive boards in a game this season, and the only reserve to do it. Over the last two decades, five players have recorded nine or more offensive rebounds off the bench, while also blocking at least three shots and scoring in double figures: Adonal Foyle, Tyson Chandler (twice), JaVale McGee, Hassan Whiteside, and Boucher.

After the game, Boucher told the media that he’s been studying Hall-of-Famer and five-time NBA champion Dennis Rodman, who is widely considered to be the best rebounder ever. Boucher doesn’t have the girth or physical strength that Rodman had, but he’s longer, and like The Worm – who averaged 13.1 boards over his 14-year career – he plays with a high motor and has a nose for the ball.

“I feel like I have the same energy as [him] and I can relate to him a lot, the ups and downs,” Boucher said. “Never let down, never give up. I’m not scared of anybody, so whoever is in front of me, I try to give the best effort. A lot of people, they’re bigger than me, but the fight, the will and all the hustle plays [make up for it]. I like doing the hard work, and right now, on this team, I feel like it’s something that we’re missing.”

With Fred VanVleet and Pascal Siakam playing at an all-star level, OG Anunoby not far behind, and Barnes and Gary Trent Jr. rounding out a strong starting five that Nurse has seemingly settled on, the Raptors have plenty of offensive firepower. Finding a second unit that he likes has been a work in progress, though. Boucher continuing to solidify himself as the leader of that group would be huge.

Boucher is in the final season of the two-year, $13.5 million contract he signed in the fall of 2020 and will be an unrestricted free agent over the summer. Instead of looking to pad his stats, like many others would be doing in his situation, the Raptors’ young vet recognizes the market value of establishing a niche and excelling at it. After all, what team couldn’t use a 29-year-old big man capable of changing games with effort and energy? That’s not a bad role to have, if you’re good at it.

“The things that he's great at he can do in his sleep,” Siakam said. “Running, rebounding, blocking shots, things that he doesn't even have to think about. And I think, obviously, if he knocks a couple of threes down it's a completely different ball game. So, I just like his energy, overall.”