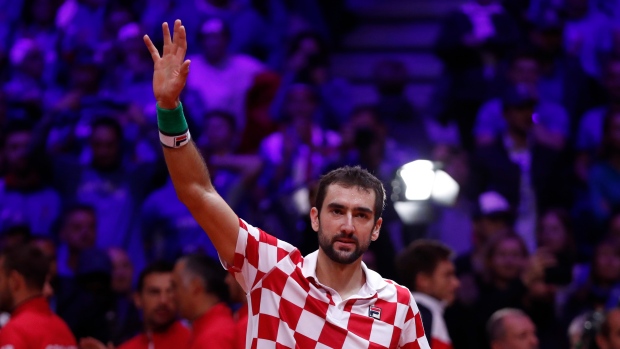 LILLE, France — After an agonizing defeat in Croatia's previous Davis Cup final, there was no letdown for Marin Cilic this time.

Cilic was two sets up against Juan Martin del Potro two years ago in Zagreb, with Croatia leading Argentina 2-1 on the final day, when his game collapsed as the South Americans fought back and ultimately won the final.

This weekend in northern France, Cilic did not give even a glimmer of hope to his French opponents that they could stage a comeback of their own.

On the indoor clay court set up inside the Lille soccer stadium and in front of a hostile crowd, the former U.S. Open champion was ruthless and composed. His clinical display on Sunday secured a 7-6 (3), 6-3, 6-3 win over Lucas Pouille to give Croatia a 3-1 victory over defending champion France in the best-of-five series. Both teams agreed not to play the final rubber.

Cilic said his loss to Del Potro hadn't been a distraction but he was relieved to finally add the Davis Cup trophy to his list of trophies.

"I was always sleeping well, so no problem, but I'm happy that I played so well this weekend," the 30-year-old Cilic said.

While Argentina was able to fight back, the French didn't have the weapons required. The hosts won the doubles but were thrashed in straight sets in the three singles matches played against Cilic and Borna Coric.

"Look at the statistics from Borna and I, in three matches we did not lose a serve, it says much about our level and how well we played," said Cilic, who finally tasted success in the team event 12 years after his debut. "We were both in a great form at the right time."

Cilic lived up to his status of team leader. After beating Pouille, he was surrounded by the whole Croatian team on the court and covered his shoulders with the Croatian flag. The country's president, Kolinda Grabar-Kitarovic, warmly hugged him.

"It's not every day that you become a world champion," Cilic said. "For us, it's a dream come true, for this nation, we are so passionate, you can see the fans. And I feel that in Croatia it's going to be incredible too."

Croatia won the Davis Cup for a second time, after victory in 2005, and denied France an 11th crown.

"They destroyed us," France captain Yannick Noah said. "They did not give us a single break."

The final was played for the last time in its traditional format. Beginning next year, the top team event in men's tennis will be decided with a season-ending, 18-team tournament at a neutral site.

After Nicolas Mahut and Pierre-Hugues Herbert won Saturday's doubles, France trailed 2-1 and needed to win both reverse singles on the final day to become the first team since 1939 — when Australia beat the United States — to overturn a 2-0 deficit in a final.

But their hopes of a comeback were quickly dashed.

The seventh-ranked Cilic struggled with his first serve in the opening set but gradually found his rhythm while Pouille started well but quickly faded.

Pouille, who replaced Jeremy Chardy after Noah changed his lineup in a bid to force a decisive fifth match, made repeated mistakes on his backhand. Pouille hit a total of 44 unforced errors, compared to Cilic's 29.

The Frenchman, who wrapped up France's 10th Davis Cup title last year by winning the decisive point against Belgium, managed to stay in contention on the back of his strong serve and some clever drop shots that surprised Cilic, but his Croat rival raised his level in the tiebreaker. Cilic won four straight points to seal the set, including a thunderous forehand pass that left Pouille stranded.

Pouille's level of play then dropped drastically while Cilic kept up the intensity and broke for a 4-2 lead in the second set. Pouille managed to save four set points in the eight game with a series of good serves before Cilic held his next service game to seal the set with a crosscourt forehand.

Despite the support of the vociferous French fans at the Pierre Mauroy stadium, Pouille appeared powerless in the third set and dropped his serve again in the fifth game after yet another backhand error that sealed his fate. The Frenchman saved two match points at 5-3 but was forced to watch when Cilic unleashed a superb lob that secured another break and the title.

"This is one of the best teams we ever had, it's like a dream team," Croatia captain Zeljko Krajan said. "After seven years on the bench, it's an honour for me to be here. My singles players not only didn't lose a set, they didn't lose serve in three matches which is an unbelievable achievement and shows you the quality that we produced."