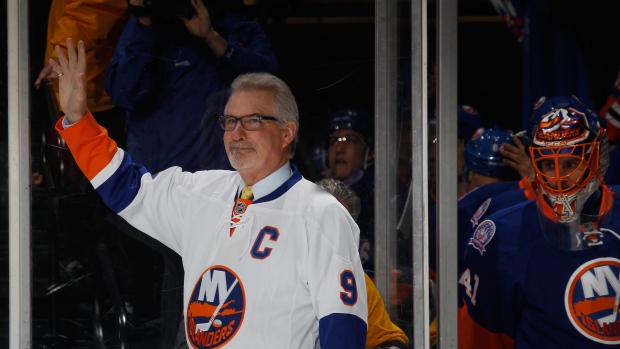 The New York Islanders announced Friday night that legendary power forward and Hockey Hall of Fame member Clark Gillies has passed away at the age of 67.

The New York Islanders are deeply saddened to learn of the passing of legendary power-forward and Hockey Hall of Fame member Clark Gillies.https://t.co/wKISWA6L2b

"The entire Islanders community is devastated by the loss of Clark Gillies," Islanders President and General Manager Lou Lamoriello said in a statement. "He epitomized what it means to be a New York Islander. The pride he felt wearing the Islanders sweater on the ice was evident by his willingness to do anything to win. Off the ice, he was just as big of a presence, always taking the time to give back to the local community. The New York Islanders have four Stanley Cups because of the sacrifices he and the members of those dynasty teams made for the franchise. On behalf of the entire organization, we send our deepest condolences to the entire Gillies family."

A native of Moose Jaw, Sask., Gillies spent 12 seasons of his 14-year career with the Islanders from 1974 to 1986 after the organization selected him fourth overall in the 1974 NHL Entry Draft. He spent his final two seasons with the Buffalo Sabres.

Gillies was inducted into the Hall of Fame in 2002.

"Gillies helped define the term 'power forward' during a 14-season, Hall of Fame career with the Islanders and Buffalo Sabres that was highlighted by winning four straight Stanley Cups with the Islanders", said Bettman. "His 319 goals and 378 assists in 958 NHL games -- and his 47 goals and 47 assists in 164 Stanley Cup Playoff games -- reflected his talent. The adoration and admiration of his teammates reflected the heart and passion he brought to our game. We send our deepest condolences to his family and his countless friends and fans."

Gillies played his final two NHL seasons with the Buffalo Sabres, and the club also paid tribute to him on Friday night.

We are saddened to learn about the passing of Hockey Hall of Famer and former Buffalo Sabre, Clark Gillies. Our thoughts and prayers are with his family and friends during this difficult time. 💙💛 pic.twitter.com/vVieb4qyyp

"We are saddened to learn about the passing of Hockey Hall of Famer and former Buffalo Sabre, Clark Gillies. Our thoughts and prayers are with his family and friends during this difficult time," the Sabres tweeted.