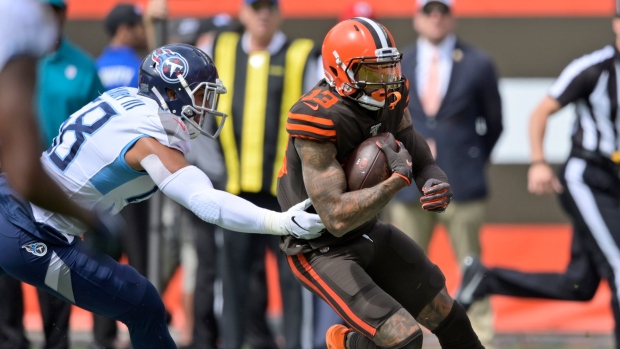 Beckham said on Thursday that his teammates need to be ready for the "dirty plays and cheap shots" coming from Williams' defence.

In 2017, during a preseason game against the Browns with Williams as defensive coordinator, then New York Giant Beckham incurred a low hit to his left knee from cornerback Briean Boddy-Calhoun that took him out of the game and kept him from playing in Week 1.

"It was preseason," Beckham said of the hit. "That says enough. It's like a known rule that in preseason nobody in the NFL is out to do stuff like that. I had players on this team telling me that's what [Williams] was telling them to do - take me out of the game - and it's preseason. You just know who he is. That's the man calling plays."

Beckham believes the hit helped derail his season that ended in Week 5 with a broken ankle.

"I came back too early," Beckham said. "For my team, I gave them all I had even though I knew I was still three weeks out [from being healthy]. I came back probably three weeks too early, just because we lost the first game of the season and I felt that pressure to come out there and do what I can to help the team...that high ankle sprain led to a broken ankle on the left, which led to [over]compensation in many different areas that led to like a little spiral. It's something that I'll never forget and it changed my life forever."

Beckham says that he won't let whatever Williams has planned to get to him.

"If I were a coach, I would never teach what he teaches," Beckham said of Williams. "That's just him and what he does, but there's no real getting under my skin. That was never the case. It's just a lot of extra stuff that went on that people don't know about that I was more frustrated with than anything."

In 2012, Williams was suspended indefinitely by the NFL for his role in the New Orleans Saints' "Bountygate" scandal in which it was determined that Williams and head coach Sean Payton placed bounties on the heads of opposing players that would be paid out should their players injure them.

Williams would go on to spend the entire 2012 outside of the NFL before returning to the coaching staff of the Tennessee Titans.