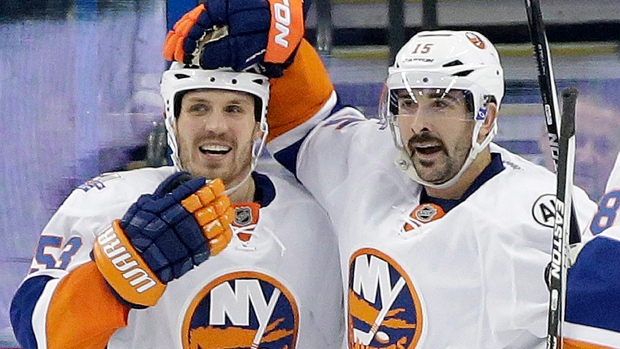 Matt Martin, Casey Cizikas and Cal Clutterbuck showed why on Monday night against the Colorado Avalanche.

Clutterbuck's goal 1:52 into the third period broke a 2-all tie and Cizikas added a necessary insurance score in the Isles' 5-3 win.

"They do the right things," Islanders coach Jack Capuano said. "When you work hard, you get rewarded in life. The way that they're playing right now, they deserve to get rewarded."

"Our goalie played extremely well there in the first period that kept the score where it was, or we could've been behind the 8-ball," Capuano said. "The name of the game is to get points, so hopefully that will give the guys some confidence as we move forward."

Jarome Iginla, Nick Holden and former Islander Blake Comeau each scored for Colorado, but the Avalanche fell for the fifth time in their last seven games.

"It's a game I thought we could've had," Iginla said, "and it didn't happen."

Martin and Clutterbuck tied for the game-high with eight hits each, setting a physical tone. Early in the third period, off a faceoff win, Clutterbuck redirected Thomas Hickey's point shot past goalie Semyon Varlamov's glove.

The goal was Clutterbuck's sixth of the season and the first of two third-period goals from the Isles' fourth line.

"We might not score twice every night, but I think it just creates energy," Clutterbuck said. "It creates a feeling of teams being on their heels when we're out there getting scoring chances and creating a buzz."

With Varlamov on the bench, Holden cut the Islanders' lead to 4-3 with 3:34 left, but Strome scored an empty-net goal with 47.9 seconds left.

The goal was Strome's second since he was recalled from Bridgeport of the AHL on Thanksgiving, and he has four points in three games since returning to the NHL.

"When he went down it was a confidence thing," Capuano said. "I think his pace is getting closer to where it needs to be. His physicality is getting closer. There's still room for improvement ... but he's been good since he's been back."

The Avalanche nearly scored off the opening faceoff, but Greiss robbed Matt Duchene with a left-pad save.

"I thought in the first period, we could've had two or three goals," Duchene said. "Obviously, (Greiss) made that really good save on me the first shift. If that goes in, it might be a different game."

Colorado took the lead 10:20 in. After Greiss stopped Comeau's original shot, the winger circled the net and flipped the rebound over Greiss. The goalie unwittingly knocked it in with the top of his stick.

The Avalanche limited the Islanders to seven first-period shots and very nearly carried a one-goal advantage into the first intermission. But Cody McLeod and Gabriel Landeskog each took penalties in the final minute, and Okposo buried a snap shot with 1.4 seconds left.

Grabovski gave the Islanders their first lead at 6:31 of the second. But just 41 seconds later, Iginla's seeing-eye wrist shot confounded Greiss and tied the game 2-2.

"I was just floating it through traffic, and it just found its way in the corner," Iginla said. "The goalie just didn't see it at all."

The goal was Iginla's 597th of his career, leaving him four shy of Jari Kurri for 18th place on the career list.

The Islanders peppered the Avalanche cage late in the second period, but Varlamov was outstanding. The Avs goalie has struggled at points this season but stopped 13 of 14 in the frame as the Islanders recorded seven of the period's final eight shots after Iginla's goal.

"For whatever reason, we didn't start very well tonight; didn't start on time," Capuano said. "I thought halfway through the second period and the third, I thought we played really good hockey."

NOTES: Iginla's goal was his eighth this season but only his second in Colorado's last 12 games. ... Duchene played despite suffering from flu-like symptoms Sunday. He missed Colorado's morning skate. ... Islanders forward Josh Bailey played in his 500th NHL game. ... The Islanders will host the Rangers on Wednesday night in the rivalry's first-ever matchup in Brooklyn.