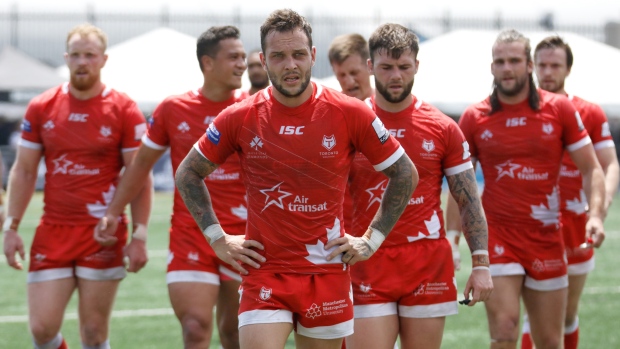 TORONTO — Jon Wilkin brought 16 years of Super League experience to the Toronto Wolfpack this season, hoping to use that knowledge to take the transatlantic rugby league team to the top tier.

Wilkin and the Wolfpack won 26 of 27 regular-season games in 2019 and are two victories away from securing a berth in the Super League. Toronto hosts Toulouse Olympique on Sunday in a promotion playoff semifinal.

On Tuesday, Wilkin was recognized for his on-field contributions when he was named one of three finalists for the Betfred Championship Player of the Year as chosen by the 14 Championship coaches.

Toronto's Brian McDermott is nominated for coach of the year, along with Mark Aston of the Sheffield Eagles and James Ford of the York City Knights.

The winners will be announced Sept. 24 in Manchester, England.

The 35-year-old Wilkin is versatile on and off the field. Nominally a loose forward, he leads the attack from a variety of positions. The England and Great Britain international can kick, pass or just run over an opponent.

And the space between his ears is crammed with useful information.

"With JP, same as Jon Wilkin, what you've got is a guy who's tough, who's fit, who can play the real rough and tough stuff ... But what he is is really smart on the field. This is where he and JP are similar. They read the game really well. You only get that by playing 300, 400, 500 times. He reads offence really well."

McDermott says, like Peacock, Wilkin's value off the field is equally immense.

"He brings realism to what we do every week. He's the guy that when blokes have been reading headlines or we've come off the end of a great win or we've just trained really well, Wilko is the guy that brings the group in and gives them some real information that matters. And he brings everybody back down to earth."

"It really is like having a coach on the field while we play. He's that good," added McDermott.

In addition to his Wolfpack playing duties, Wilkin is a restaurateur and TV rugby league pundit.

Ackers began the season as Toronto's second-choice hooker or dummy half but surpassed Bob Beswick to take the No. 1 job. A triggerman for the Wolfpack offence, Ackers is a dynamic runner who's hard to stop.

"He's also learned some of the smarts and the subtleties that a dummy half needs as well." said McDermott. "He's very pivotal to what we do."

O'Brien, 27, is dwarfed by his teammates and opponents but provides reliable defence with some stylish offence as well as a cultured kicking boot.

"Add to that a fair amount of bravery. He's pretty robust. He doesn't mind taking a hit," said McDermott.

Winger Matty Russell is probably hard done by in not getting an award nomination after a season that saw him score 27 tries, tying Liam Kay's single-season team record set in 2017. He likely would have broken the mark if he had not missed several games through injury.

As for the coaching award, McDermott says it should go to Ford, who led York City out of the third-tier League 1 last season and is bidding for a second straight promotion.