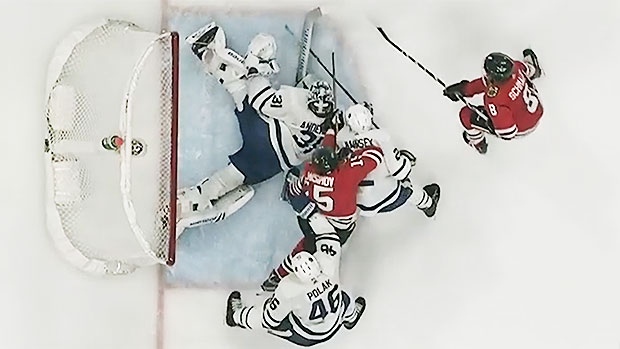 The NHL coach's challenge rule may bear their name, but do not confuse that for approval or endorsement from the men who stand behind the bench.

Because if there was one thing that came through loud and clear in TSN's Mid-Season NHL Head Coaches Poll, it's that there is widespread dissatisfaction and frustration with the concept and execution of video review challenges for offside and goalie interference.

"Not one coach I've talked to knows how [goalie interference] is being called from game to game," said one NHL head coach.

As part of a poll to determine the mid-season best player, best goalie, best defenceman, best rookie and best coach, the coaches were also asked the following issue-oriented question(s):

- Video review coach's challenge for goaltender interference: Keep it; Can it; Modify it?

- Video review coach's challenge for offside: Keep it; Can it; Modify it?

All 31 head coaches in the league responded to the survey.

The results were as follows:

- On goalie interference video review challenges: 14 said keep it; three said can it; and 14 said modify it. In other words, 17 of 31 are dissatisfied with the status quo.

- On offside video review challenges: Two said keep it; eight said can it; and 21 said modify it. Remarkably, 29 of 31 have issues with it.

Obviously, the offside review - a coach may initiate an offside challenge to question whether the offensive zone entry prior to the scoring of a goal was offside as long as the coach is prepared to be assessed a minor penalty if wrong - has proven to be the most irksome to the head coaches.

That only two NHL coaches want to maintain the status quo on offside reviews is quite telling.

There were a variety of suggestions offered to make it more palatable.

One coach said the league should do away with blueline camera and only use traditional TV feed camera angles and that if the linesmen and/or Hockey Operations staff in Toronto can't make a quick determination from those views, then the call on the ice stands.

"But if you're keeping the blueline camera," one NHL coach said, "I would suggest using the [neutral zone] leading edge of the blueline [to determine onside/offside], so that as soon as the puck is on the blueline, as long as there's any body part still outside the blueline [in the neutral zone], it's not offside."

Another coach echoed that sentiment.

"Keep the penalty [for an incorrect offside challenge]," he said, "but let's use the idea Darryl Sutter always talked about - the puck only has cross the front side of the blueline [to be considered in the offensive zone]."

Several coaches said it is imperative the league tweak the definition of offside to eliminate the most difficult reviews and whether a player's trailing skate blade is on or off the ice.

"Just worry about the 'breaking the plane' issue, not whether the skate is on the ice," one coach said.

Another coach proposed the league does away with the current "possession" rule on offside; that is, if a player is deemed to be in possession of the puck, the player may precede the puck into the offensive zone.

The most common refrain from coaches is that the decision-making power on video review challenges should go to the NHL's Hockey Operations staff in Toronto, not with the on-ice officials who made the call.

When the video review challenges were first implemented in the NHL, the final authority on decision-making rested in the hands of the on-ice officials, with the ability of referees and linesmen to consult and confer with Hockey Operations in order to uphold or overturn their initial call.

That technically is still the case on goaltender interference reviews, but starting this season, Hockey Ops began taking more of a lead role on offside reviews in order to expedite the process. In other words, Hockey Ops could conceivably have reviewed and determined whether a play was offside by the time the goal was scored and then advise the linesman of that via the phone line at the timekeepers' bench.

But on difficult offside calls, Hockey Ops will still often defer to the linesman who made the call to either overturn it or reaffirm it.

For the most part, the coaches believe there'll be greater consistency and expediency if Hockey Ops takes full control of the offside review process.

As for goalie interference video review challenges, where the final authority and decision still very much resides with the referee, the coaches' refrain was emphatic: "Let Hockey Ops in Toronto make the call."

"It's better in a controlled environment," one coach said.

‘There'll be more consistency if the same [Hockey Ops] guys are doing all the reviews," said another.

One coach, however, took the opposite view.

"It seems to me there are too many cooks in the kitchen," the coach said. "If a ref makes a call, if he's on the phone to Toronto for five minutes and they're watching the play over and over and over again. Maybe we're overthinking this and the ref should just go with his original call."

Of course, it could be as simple as realizing that even with use of video review - which might infer a definitive black or white decision can be made - goalie interference always was and always will be a highly subjective call that will vary from referee to referee. And that video review is still nothing more than the zebra being allowed to check his own work and consider a mulligan on his original call.

There were other suggestions to improve goalie interference video review challenges.

One coach said he would like to see the goalie interference review mirror that of offside review and have a minor penalty - not the loss of a team's timeout - for an incorrect challenge.

"[Replacing loss of timeout with a minor penalty] will take out a lot of the [goalie interference] challenges," the coach said. "It would put the word ‘egregious' back in the coaches mind when they decide to challenge, understanding the two-minute penalty consequence."

Another coach endorsed that idea "because a lot of the really controversial goalie interference calls we've had lately never would have been challenged in the first place because of the fear of taking the minor penalty. Only the obvious ones would get challenged, and that's a good thing."

Predictably, the NHL's officiating community does not share or endorse a lot of the coaches' views on video review challenges. Referees often complain that the coaches don't necessarily understand the rules and that angling for Hockey Ops staff to make officiating decisions may turn into "be careful what you wish for."

There may also be a bit of a disconnect between NHL head coaches and their own general managers, who ultimately shape how video review coaches challenges are conducted.

At the most recent NHL GM meetings in November, the GMs were shown the 10 most controversial coach's challenge reviews to date and were asked to vote correct call or wrong call. There was rarely if ever unanimity but there was a clear consensus or majority on each call. Reportedly, in 10 of 10 instances, the call that was made between on-ice officials and Hockey Ops lined up with how the simple majority of the GMs viewed it.

Perhaps a similar exercise involving NHL head coaches, instead of GMs, would be beneficial.

The rule, after all, does bear their name, not that it necessarily makes the coaches like it any better.