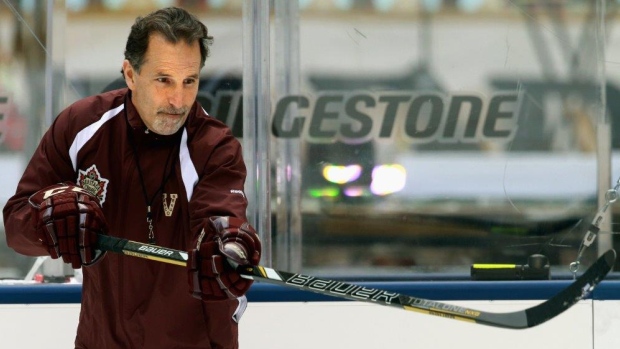 The patient, believed to be in relatively good health, ‎was (to the surprise of many) showing no signs of life. It finally got to the point (0-7) where there was no choice but to take drastic action.

You know what happens next: Fire up the paddles.

Once more, with feeling.

We'll have to tune in to see where this goes next -- the morbid silence (save the steady beep of the flat line)? Or the super-charged patient miraculously sitting bolt upright, tearing off the IV and wires, yelling: "I gotta get outta here and go block me some shots."

Either way, it is now must-see TV.

Let's get the facts out of the way first:

-- John Tortorella's contract in Columbus is for this season and two more, the same term he had left on his deal with Vancouver.

-- Vancouver was paying Tortorella $2 million a year to not coach the Canucks and they're still paying "some" of it but the Jackets are obviously paying the ‎(majority) difference.

-- Per NHL rules, the Canucks get from Columbus a second-round pick as compensation (more on this silliness in a moment). Columbus has until June 1 to decide which of the next three draft years the Jackets want to make the draft pick payment.

-- Tortorella will be behind the Jackets' bench against Minnesota on Thursday.

1. As much as this was a hockey decision -- an 0-7 record to start the season speaks for itself -- I sense there were also greater forces at work in Columbus.

The franchise that was born in 2000 -- unique in its size (small), location (not ground-breaking in terms of the NHL footprint) and demographics (more a college town than pro place?) -‎ was dying on the vine because of chronic on-ice failure. Eleven seasons in, it all looked like it was slip slidin' away. The Jackets finished dead last in 2011-12, which spurred, in an eight-month period, the trading of franchise cornerstone Rick Nash, the hiring of John Davidson as president of hockey operations, the firing of general manger Scott Howson and the hiring of new GM Jarmo Kekalainen.

There was one more non-playoff (albeit respectable) year, the lockout-shortened 2012-13 season, when the Jackets just missed, and then there was pay dirt – the 2013-14 season when the Jackets made the playoffs and gave Pittsburgh everything it could handle in a six-game series won by the Pens. Columbus forged an identity that playoff year, a good, young team, hard to play against, a team on the rise that was worthy of capturing the hearts and purchasing power of long-suffering Jacket fans.

Last season, though, the team was decimated by injuries. Injury is not supposed to be a valid excuse but the sheer magnitude – quantity and quality of man games lost – was overwhelming. The Jackets finished strong, missed the playoffs but came into this season expecting and being expected to be a competitive team with a strong chance of making the post-season.

Enter the 0-7 start. As bad as any seven-game losing, and pointless, streak is in hockey, it’s far worse when it comes in the first seven games of the season. My sense is there were real fears within the Jacket organization that if they didn’t pull out of this tail spin, not only would they dig themselves a hole they couldn’t get out of on the hockey front (playoffs), they would be eroding and possibly losing all the goodwill and gains they made in the Columbus sporting marketplace.

In other words, same old Jackets? Ownership and management know that isn’t the case, but frustrated fans may not be so discerning.

Patience to ride out what may have been a bad stretch of hockey, some of which the #fancystats community suggested could simply be bad luck, was no longer an option.

With apologies to a credible but out-of-work NHL coach such as Randy Carlyle, the Jackets clearly weren’t enamored with the unemployed coaching pool. Columbus already took David Clarkson from the Toronto Maple Leaf tire fire, they weren’t about take the coach (Carlyle) who was consumed in that blaze, too.

Guy Boucher, who came within a Mike Babcock change of heart of being Toronto’s new coach and once chose Tampa over Columbus for his first NHL head-coaching gig, didn’t have an in-season out clause from his Swiss League contract. Which is to suggest if an NHL team really, really wanted Boucher, it could probably find a (financial) way to make that happen, but Columbus was looking for something fast and furious.

There are all sorts of up-and-comers in the coaching fraternity – Travis Green in Utica, amongst many more – but Columbus was dialing 9-1-1 and couldn’t or wouldn’t want to take a chance on a first-timer. Plus, from the moment Larry Brooks of the New York Post first legitimized in mainstream media the possibility of Tortorella to Columbus, you could sense the Jackets were going for a high-impact option, a move that would get its beleaguered fans to sit up and take notice. Love him or loathe him, Torts is that guy.

3. You know what scares the bejeepers out of the Jackets’ hierarchy right now? Sergei Bobrovsky.

Their Vezina Trophy-winning goalie has had a terrible start to the season. His save percentage is .835. Mind you, he didn’t play the last two games and Columbus still lose those and fired Todd Richards.

What scares them, deep down, is, what if it wasn’t coaching that was the real problem? There’s been myriad of them so far this season – chiefly poor defensive play from the blueliners and forwards – but the goaltending of Bobrovsky has been abysmal. What if that continues? What if he doesn’t snap out of his funk?

When Bobrovsky recently admitted, quite publicly, his confidence was shot, the Jackets were horrified. Give Bob points for honesty, but when he’s in the first year of a deal that pays him $7.425M per year, crisis of confidence is not what you want to hear out loud from your No. 1.

Whatever impact Tortorella can have on this group, if Bob doesn’t re-discover his mojo, it’s going to be a long year.

4. What if the Blue Jackets just aren’t that good?

I don’t think anyone doubts they could be a good team. A first line of Ryan Johansen between newcomer Brandon Saad and Nick Foligno should be one of the better and more entertaining units in the league and a supporting cast of Brandon Dubinsky and Boone Jenner gives them a credible top six. The future seems bright with kids such as Zach Werenski, Alex Wennberg and Sonny Milano, to name only a few.

But there are question marks on a defence led by Jack Johnson, David Savard, Ryan Murray and Fedor Tyutin. Their puck-moving hasn’t been sharp. With veteran castoffs from other organizations (Clarkson, Scott Hartnell, Rene Bourque) and depth players (Gregory Campbell and Jared Boll), are the Jackets deep enough or fast enough.

I asked around about that, with NHL personnel who see the Jackets enough to know. The feedback was a relatively positive, painting the Jackets as a good team on hard times, perhaps best summed up as follows: “I like their team actually. The defence is struggling to move the puck right now, which makes them look slow(er). Goaltending has been sub-standard so far. No one wins in this league with average D and below average goaltending.”

5. As for the Jackets having to give up a second-round pick as compensation to Vancouver for Tortorella, it’s just silly. It really is.

Compensation to one team for losing personnel to become a head coach or GM for another team was never, at least not from those clubs who were pushing the issue, meant to reward teams who fired a coach or GM. Vancouver’s compensation for Tortorella coaching in Columbus should simply be losing a good chunk of the remaining dollars on Torts’ contract.

Compensation was intended to help organizations like the Detroit Red Wings, whose assistant coaching and assistant managerial ranks have been decimated over the years by supplying talent both in and out of season to rival organizations.

This really needs to get fixed. My colleague Gary Lawless writes about it here.

7. Perhaps I missed it, but did no one at Torts’ news conference in Columbus today ask him about his favourite dolphin movie?