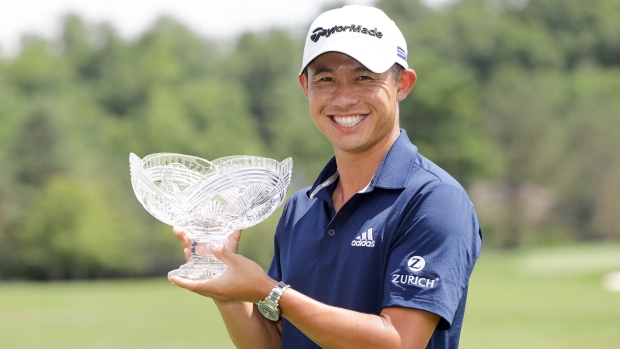 Collin Morikawa missed an opportunity to win a PGA Tour event in a playoff earlier this year. He wasn’t going to let it happen again.

Morikawa made up three shots over the last three holes to catch Justin Thomas and then outlasted him in a three-hole playoff to get his second tour win in just 24 starts, capturing the Workday Charity Open.

The victory comes five weeks after he missed a three-foot putt in a playoff at the Charles Schwab Challenge, giving the victory to Daniel Berger.

“This is a huge kind of stepping-stone,” Morikawa said of the win. “We got No. 1 out of the way, we got No. 2, let the gates just open and let's just keep going because obviously it was a tough loss at Colonial a month ago, but I learned a lot.”

Thomas started the day with a three-shot lead, but struggled with bogeys at the second and third holes, his first two bogeys of the week. Coupled with Morikawa going four under over his first five holes, the leaderboard tightened up.

Thomas rebounded in the middle of the round, making four birdies consecutively from the eighth hole, and then adding a birdie on 14 and an eagle on 15. Standing on the 16th tee, he once again led by three.

But on the par-3 16th, he missed the green and failed to get up and down, then repeated that error on the 18th hole, after his second shot from a fairway bunker came up short of the green.

Morikawa birdied the 17th hole to get to 19-under-par, tying Thomas. One hole later, the two were still tied, necessitating extra holes.

The drama in the playoff heightened as Thomas made a 50-foot putt on the first extra hole forcing Morikawa to drain a 24-footer to stay alive.

On the next playoff hole, Thomas missed a nine-foot down hill putt on that would have given him the win.

On the third playoff hole, Thomas’s tee shot ended up directly behind a small tree forcing him to pitch out to the fairway. That opened the door for Morikawa who made no mistake this time around, using two putts to secure the win.

Thomas was unhappy with his performance over the day, knowing he missed a glorious opportunity for his 13th tour title.

“Just it's completely unacceptable to give up a three-shot lead with three to go,” he stated. “I'm upset, I'm disappointed in myself, but at the end of the day it's over with now, and I just need to take some time this afternoon and tonight to build on it and figure out what I can do better going into next week.”

Roger Sloan finished as the top Canadian, ending up in a tie for 27th spot, after a final round 70. It’s his best finish since last September.

Adam Hadwin had the best final round of the group with a four-under 68. That lifted him into a tie for 35th spot. Corey Conners tied for 39th while Mackenzie Hughes and Nick Taylor ended up tied for 48th.

Conners, Hadwin, Hughes and Taylor are all playing a second week at the Muirfield Village Golf Club as the Memorial Tournament is being contested at the same site.

It’s the first time since 1957 that two tournaments have been held on consecutive weeks at the same facility.