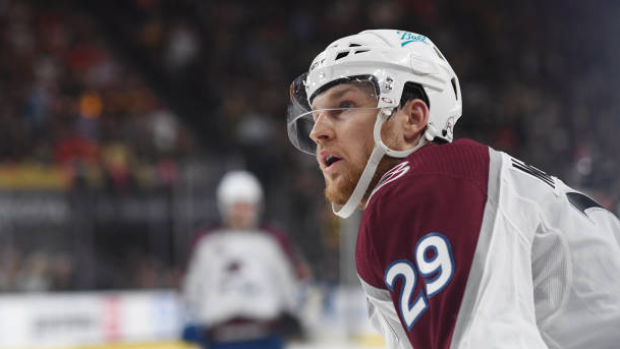 Colorado Avalanche forward Nathan MacKinnon was candid after his team's Presidents’ Trophy-winning season came to an end in Game 6 Thursday against the Vegas Golden Knights.

The Avalanche, who swept the St. Louis Blues in the first round, took a 2-0 lead in their second-round series before the Golden Knights stormed back.

"I'm going into my ninth year next year and I haven't won s---. So, I'm just definitely motivated, and it just sucks losing four [games] in a row to a team," MacKinnon said after the 6-3 Game 6 loss.

The Avalanche tied the Golden Knights with a league-high 82 points this season, winning the Presidents’ Trophy on a tiebreaker.

MacKinnon led the Avalanche in the playoffs with eight goals and 15 points – second-most in the league behind Nikita Kucherov. He was named a Hart Trophy finalist on Thursday after posting 20 goals and 65 points in 48 games during the regular season.

'We just couldn't get it together'

After finishing with a league-worst 48 points in 2017, the Avalanche have reached the playoffs in each of the past four seasons, but have failed to advance past the second round. Colorado lost in overtime of Game 7 to the Dallas Stars in the second round last season.

"It felt like last year was our first real chance to win, and this year, I thought we were the best team in the league. But for whatever reason, we just couldn't get it together," MacKinnon said. "I'm sure in training camp next year we'll figure it out, dissect things, and come back better."

"It's tough to find any [positives] because nobody wants to play just a good regular season and lose in the second round," forward Mikko Rantanen added. "I know all of us wanted to win, that's what we were pushing for. So right now it's tough to find positives."

The Avalanche have a number of key players scheduled for unrestricted free agency this summer, including captain Gabriel Landeskog and goaltender Philipp Grubauer.