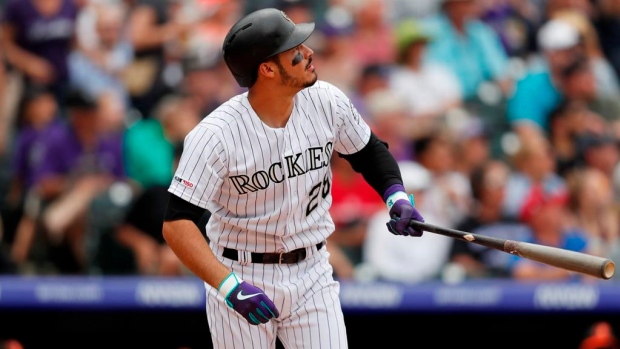 DENVER -- There was left-hander Kyle Freeland discussing his new, pause-free delivery. And there was shortstop Trevor Story hinting at agreeing to a $27.5 million, two-year deal that he really wasn't at liberty to discuss because it's not official yet.

But there was no Nolan Arenado. And there was no media availability with general manager Jeff Bridich, either, during the Colorado Rockies fan fest Saturday at Coors Field.

Manager Bud Black recently reached out to Arenado, who said this week he felt a level of "disrespect" from the front office in the wake of trade rumors and the team not being active in player acquisition this winter.

Still, he fully believes that once the Rockies get to spring training, the situation will work itself out.

"Things are going to be fine," Black said. "Players, they stay united. ... It's a group of players that is pretty bonded, pretty united."

The notion that Arenado could be dealt began to bubble last month at the winter meetings in San Diego.

Black didn't pay the speculation any heed then -- or now. He said he hears those sorts of rumors "all the time."

"I've learned that if something is really close to happening, or really serious, somebody who's really in the know, sort of tells me," he said. "That never really happened."

Freeland's view of the Arenado situation is this -- focus on the mound.

"Everything that's going on with that, it's between him and Jeff," the Denver native said. "Nolan's the kind of guy that no matter what the situation is, he's going to show up on time ready to play every single day."

Freeland is looking to bounce back following a season where he went 3-11 with a 6.73 ERA and included a stint in the minor leagues to work on his mechanics. This after finishing fourth in the NL Cy Young Award voting in 2018.

He overhauled his delivery and eliminated the pause.

"Back to a more natural, old-fashioned type of delivery," Freeland explained. "It's more of one fluid motion to allow myself to repeat my mechanics easier and more often."

On hand for fan fest was All-Star outfielder David Dahl, who's hoping to rebound from another season interrupted by injuries. He missed time in '19 with an abdominal strain and then a high right ankle sprain.

"It's been freakish injuries," he said. "I'm hoping it's all behind me."

Dahl downplayed the Arenado situation and how the team is dealing with it.

"I love Nolan," he said. "I can't really speak for Nolan right now. Right now, my focus is getting ready for the season and helping the team however I can."

As for Story, he showed up to the park on the heels of a financially lucrative new deal -- one that's still waiting for the ink to dry. The All-Star shortstop had 35 home runs and 23 stolen bases last season. He also set career highs in runs (111), batting average (.294) and on-base percentage (.363).

For this upcoming season, among his goals are to steal more bases and be more of a vocal leader.

"Leading by example is more natural for me," the 27-year-old Story said. "But I think it's a total evolution of me trying to be the player I want to be."

The Rockies tumbled to 71-91 last season under weighty expectations after making the postseason in 2017 and '18.

Since the season ended, they've made no splashy free-agent pickups. They're sticking with a similar core.

Any message to the fans?

"We feel good about us and feel the fans should, too," Story said.

Asked if he was worried about the rift between Arenado and the front office spilling into spring training or even affecting the team, Story responded: "Whatever happens, we'll do a good job of handling it. ... We're just worried about our clubhouse and trying to win games. We're all pros here, and we'll continue that way."